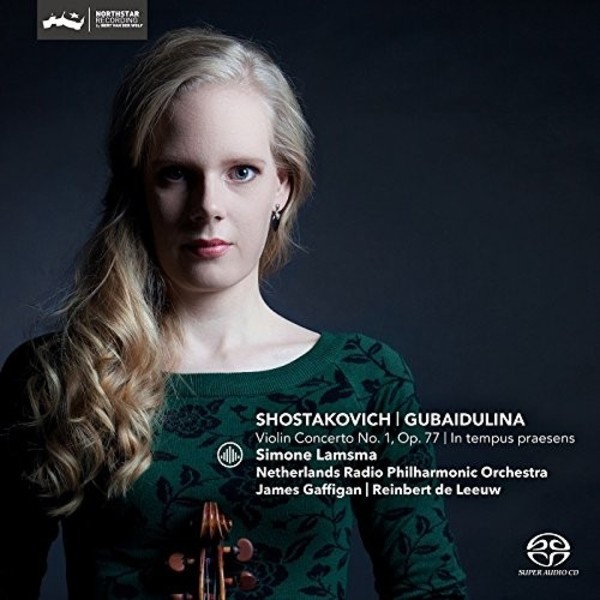 For her second Challenge Classics recording the Dutch violinist Simone Lamsma - one of the best soloists of the younger generation - features a daring but thoughtful coupling of two masterpieces from the 20th and 21st centuries: Shostakovichs Violin Concerto No.1 and Gubaidulinas In tempus praesens.

The Netherlands Radio Philharmonic Orchestra is conducted by James Gaffigan (Shostakovich) and by Reinbert de Leeuw, one of the first Western Europeans in the 1980s to discover the greatness of Sofia Gubaidulina.

The structure of Shostakovichs First Violin Concerto (1955) is particularly original, with a sequence of four movements - slow, fast, slow, fast. The opening movement (Nocturne) is a beautiful song, blossoming from a single melodic fragment. The Scherzo is biting and dazzlingly virtuosic. The ensuing Passacaglia is, quite simply, the pinnacle of this concerto; a masterpiece - mature, elegiac and highly lyrical. This is followed by a large-scale cadenza that forms a bridge to the finale, a Burlesque, in which the theme from the Passacaglia has one final, piercing reappearance.

Shortly after the premiere of Gubaidulinas Offertorium (1981), the Swiss patron of the arts Paul Sacher asked her to compose a further violin concerto for the German soloist Anne-Sophie Mutter, but nothing came of this due to lack of time. It was only in 2007, eight years after Sachers death, that Gubaidulina completed In tempus praesens, which was premièred by Mutter at the Lucerne Festival. A work of extreme contrasts in which very deep, infernal passages are juxtaposed with extremely high, celestial episodes, its a spectacular concerto for the violinist, who plays virtually from start to finish with barely a chance to pause for breath. But the virtuosity demanded by the piece is never an end in itself.

The surround recording from Challenge Classics stands out due to especially brilliant and powerful interpretations and a finely coordinated dialogue between the instruments. This is perfect harmony. - Pizzicato on CC72677