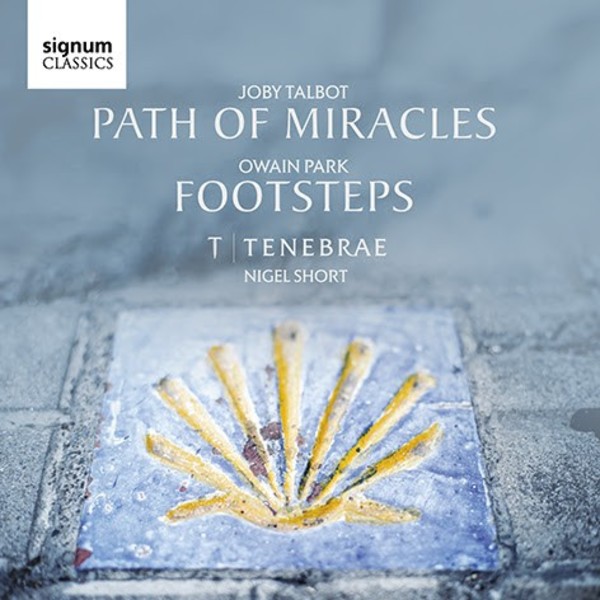 Award-winning professional vocal ensemble, Tenebrae mark their 15th anniversary season with a celebratory re-release of Joby Talbots Path of Miracles, as well as the premiere recording of a new work by Owain Park. Inspired by the pilgrimage route to Santiago de Compostela in Spain, Path of Miracles has quickly become a contemporary classic among choral music fans. Tenebrae commissioned British composer Owain Park to compose his new work Footsteps as a companion piece to Path of Miracles, and one which allows Tenebrae to perform alongside choirs near its touring locations.

I was delighted to be asked by Nigel to write a piece for Tenebrae to be performed alongside Path of Miracles. Tenebraes recording of Jobys piece is one of my absolute favourites; I remember being bowled over by the instrumental quality of the opening and the combination of ancient chant with the composers own modern voice. When I met with Nigel we spoke about the possibilities for this new work; it would need to be much shorter than Path of Miracles, but hopefully contain many complimentary themes, namely travel, solitude and journeying. Footsteps is the result of many months of researching texts to structure a narrative that cycles the seasons through the view of a lonely traveller who is constantly being moved on before being allowed to settle, finding comfort in the sky and stars above. - Owain Park

Praise for the original release of Path of Miracles:

After the eerie opening effect - a glissandi, Taiwanese style, bursting into the pilgrims hymn from Dum Pater Familias - you know you are about to embark on a remarkable musical journey ... The music weaves together diverse themes and styles encompassing sparse, clear writing with subtle use of harmony portraying the text ... It is a tour de force and absolutely stunning. - Choir and Organ