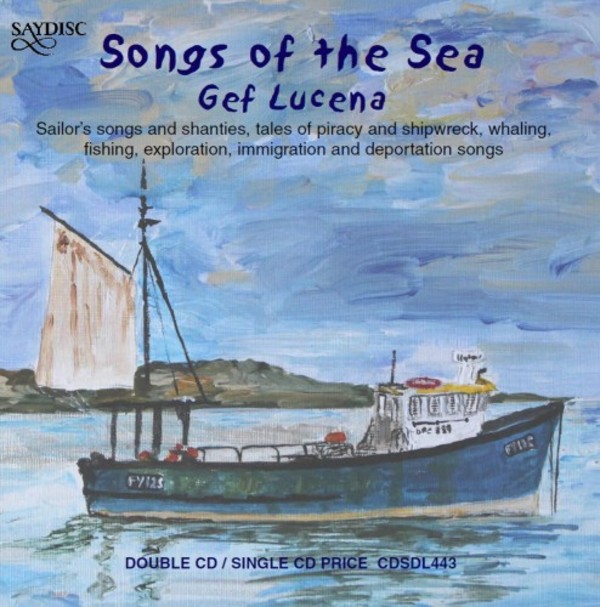 Gef Lucena: Songs of the Sea

I have been singing most of these songs on and off since around 1962. Up until about 1970 this was as half of The Crofters, the Bristol based folk duo who performed regularly at folk clubs mainly in the West of England and on radio and TV. We both sang and I played mainly mandola, autoharp, banjo and recorder and my singing partner, Martin Pyman, played guitar. My singing career was put on hold for some 30 years after all my instruments fell out of the boot of my car and were squashed en route to a folk club booking when going up a 1 in 4 (25%) hill out of Waterley Bottom near Wottonunder-Edge in Gloucestershire. In those early years The Crofters recorded three EPs and two tracks from these are included here as bonus tracks on CD2.

I started performing again around 2000 but did not record again until 2015 when I recorded a double album on the theme of love. Being folk songs, the subjects were mostly false love, deceitful love, vengeful love and supernatural love (For Love Is Lord Of All Saydisc CDSDL439). Then in 2016, following a burst of poesy, I released a book and CD of 32 of my mostly recent poems on wildlife, history and some funny stuff. (South Moon Riding Saydisc CDSDL441).

All these recent recordings were made in my home studio in our cottage in the wilds of South Gloucestershire where we have lived since 1968. We are surrounded by four ancient commons and 700+ acres of ancient woodland. The surroundings have always been an inspiration for poems and songs and for retaining a close link with past values and traditions.  Gef Lucena, 2016