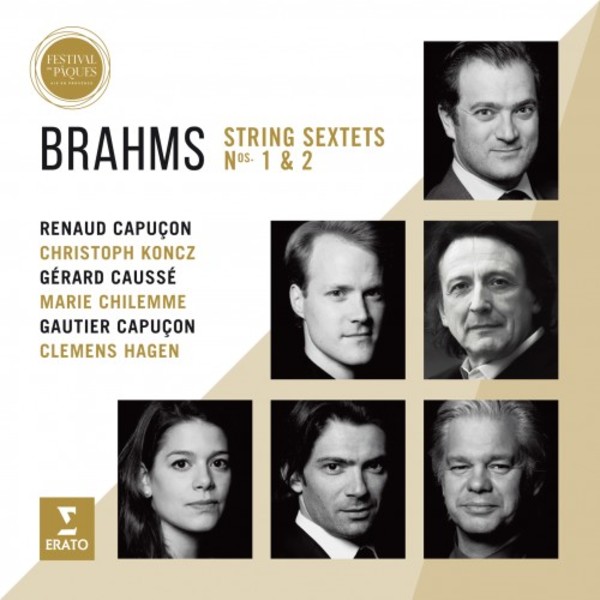 For the first time since their recording of Saint-Saëns La Muse et le Poète in 2013, the French Capuçon brothers reunite for a recording of two of the great pillars of Romantic chamber music  Brahmss string sextets. At the peak of the musical powers, they both appear regularly throughout the world on all the major concert hall platforms. Alongside their solo careers, performing chamber music with friends has always been an important part of their lives, and here they are joined by Austrian violinist Christoph Koncz, French violists Marie Chilemme and Gérard Caussé, and Austrian cellist Clemens Hagen. The album was recorded live at the Aix Easter Festival 2016.

The sextets are amongst the most joyful and skilfully-written works of the Romantic chamber music canon. While his own voice as a composer can clearly be heard, outside influences from the great Classical era composers such as Schubert and Beethoven are also in evidence.

The Second Sextet was written around the time Brahms became close to a young singer called Agathe von Siebold, so close in fact that many of their acquaintances thought they would eventually marry. Brahms however refused to be tied down and Agathe broke off the relationship.  Near the end of the exposition of the first movement, the first and second violins together spell "Agathe" by playing the notes A-G-A-D-H-E, leading many to deem this work as dedicated to her. After completing the work Brahms wrote to a friend, "Here I have freed myself from my last love."

Its been some years since weve had a disc of Brahmss sextets as thoroughly satisfying as this one, recorded live at the 2016 Aix-en-Provence Easter Festival. The Capuçon brothers and their colleagues may be an ad hoc group but they play with the unanimity and blended tone of a veteran ensemble. Even in the most intricate passages, the six parts dovetail seamlessly, not only in terms of the smoothness of execution but in consistency of phrasing as well. Best of all, the musicians find a near-ideal balance of urgency and patience  the hallmark of a great Brahms interpretation.  Andrew Farach-Colton
Gramophone June 2017