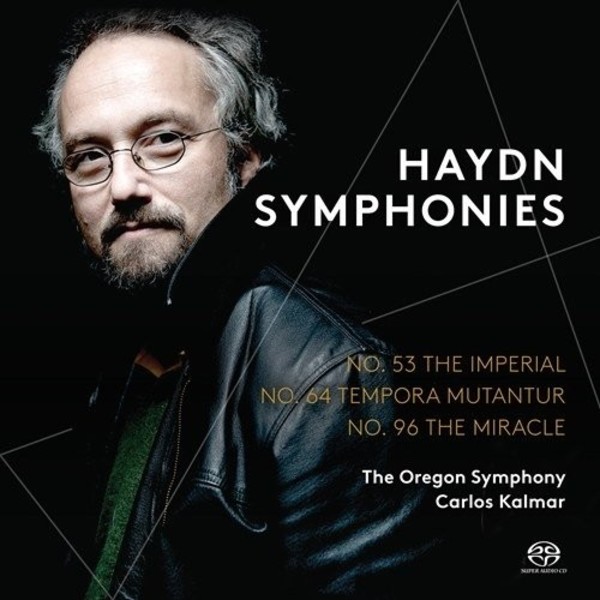 Whether its a confident swagger or a balletic grace, a beguiling folk-melody or a quicksilver rondo, there is always something new to discover in the endlessly inventive symphonies of Haydn, especially in these firm favourites played by the Oregon Symphony under Carlos Kalmar in this new release.

While Haydn wrote only one Surprise Symphony, there are surprises to be enjoyed aplenty here. From the bewildering Largo in Symphony No.64 with its unexpected turns and derailments, to the ceremonial elegance and ear-tickling melodies of Symphony No.53 or the mock-heroics and propulsive rhythms of Symphony No.96, Haydns irrepressible and dazzling ingenuity constantly delights and astonishes. There is no one who can do it all, wrote Mozart, to joke and to terrify, to evoke laughter and profound sentiment  and all equally well, except Joseph Haydn.

This is Carlos Kalmars fourth album for Pentatone with the Oregon Symphony. Their album Music for a Time of War, earned two Grammy nominations (Best Orchestral Performance and Best Engineered Album, Classical) and was widely praised by music critics.

Gramophone said of their album This England Kalmars Oregon performance certainly pulls no punches  a total success, gripping in mood and hot on specific instrumental detail, adding, sound-wise, you couldnt ask for more; nor could anyone expect finer recording from Pentatone. And in 2016, their critically acclaimed album of 20th-century American orchestral works The Spirit of the American Range earned a Grammy nomination for Best Orchestral Performance. Carlos Kalmar, a Uruguayan national, is in his fourteenth season as Music Director of the Oregon Symphony. He is also the artistic director and principal conductor of the Grant Park Music Festival in Chicago.