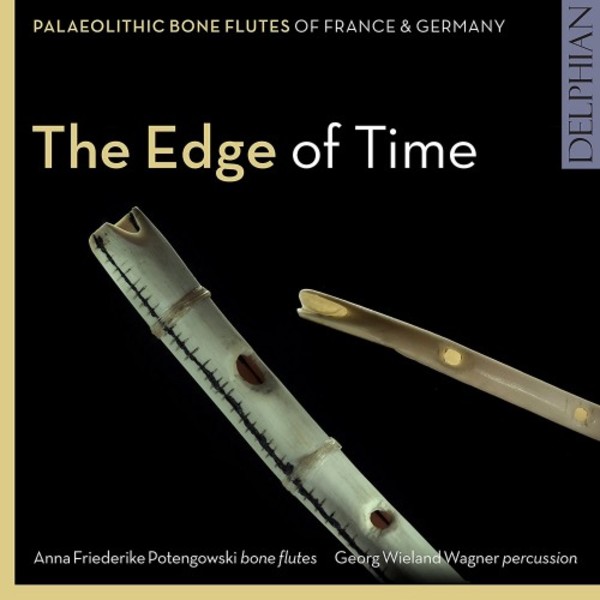 The Edge of Time: Palaeolithic Bone Flutes from France & Germany

Around 40,000 years ago, towards the end of the last Ice Age, the upper Danube region was settled by anatomically modern humans. Traces of their daily life have been found at several cave sites in the south of modern Germany, including fragments of perforated bird bones and mammoth ivory. Representing the oldest evidence of musical creation worldwide, these prehistoric flutes  two from caves at Geissenklösterle, one from Hohle Fels, and a slightly later, more fully preserved find from Isturitz cave in the French Pyrenees  have been reconstructed in the modern era. Flautist Anna Friederike Potengowski has studied the instruments and their possible playing techniques, and together with percussionist Georg Wieland Wagner has created a compelling programme of music in which contemporary modes of expression absorb and are reshaped by echoes from the edge of time.

Water splashing against rocks, rustling grasses, the eternal musical truth of breath on bone The fourth volume in Delphians pioneering collaboration with the European Music Archaeology Project has the deepest roots  and the widest reach  yet.

These flutes have now been reconstructed as part of the European Music Archaeology Project and are here treated with real imagination, in conjunction with natural percussion noises, to create a tapestry of plausible sounds. The bending pitches and haunting, wavering timbres are used in original fantasies by Anna Friederike Potengowski and Georg Wieland Wagner, and even extend to a classic piece by John Cage. Worth exploring.  Nicholas Kenyon
The Observer 30 April 2017

Theres a special thrill in hearing the sound of an ancient instrument, and a CD released this week gives us a rare chance to do it. Entitled The Edge of Time, it contains pieces and improvisations played on replicas of Paleolithic bone flutes - the oldest instruments in the world
The Daily Telegraph 11 April 2017