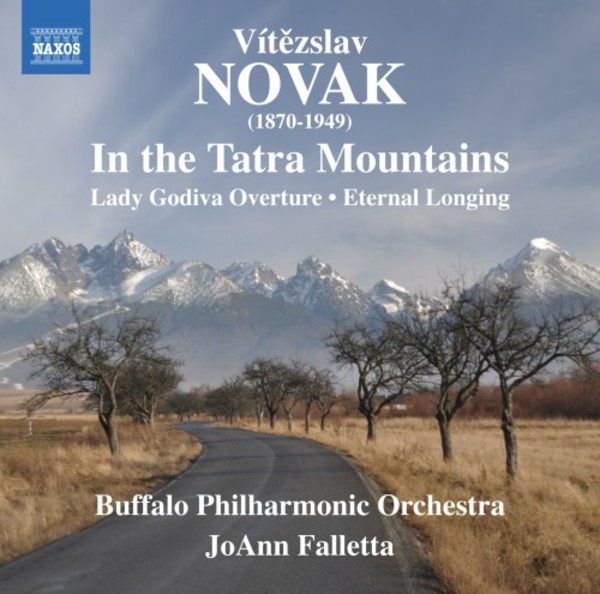 Emerging from the fertile background of Bohemian nationalism, Vítězslav Nováks music achieved cult status in his homeland for its richness of melody and full-blown romantic orchestral colour. The lush timbres and monumental solemnity of In the Tatra Mountains were inspired by the composers journeys in this magnificent region. Eternal Longing is based on a poem by Hans Christian Andersen, while the dramatic Lady Godiva Overture, complete with tolling bells at the finale, was written by Novák in two days and is considered one of his most powerful works.

Despite his undoubted skill as a master portrayer of poignant atmosphere and monumental landscape the music of Vitĕzslav Novák is surprisingly little known outside of his Bohemian homeland, and most of the alternative recordings for these works are relatively antique versions with Czech national orchestras on the Supraphon label. Inhabiting comparable worlds to those of Smetana and Dvořák as well as introducing the luminous influence of Debussy, Nováks works merely need a little extra exposure to become more mainstream and popular, and this release will help raise his reputation with wider audiences.

Conductor JoAnn Fallettas recordings for Naxos with the Buffalo Philharmonic Orchestra have generated wide acclaim over a remarkable range of repertoire. Their 2014 recording of Glières Third Symphony (8573161 and NBD0041) was universally admired amongst the critics, being a MusicWeb International Recording of the Year and with Gramophone pointing out that JoAnn Falletta is a keen admirer and has an excellent ear not merely for clarifying and controlling the orchestral sumptuousness but for articulating the events dramatically. Her forces cast themselves into the fray with enthusiasm and virtuosity...

When it comes to European and Czech repertoire these artistic forces have further proven themselves in works such as Josef Suks Fairy Tale (8572323), of which Gramophone considered that Fallettas full-textured, warm-hearted approach delivers on many levels.