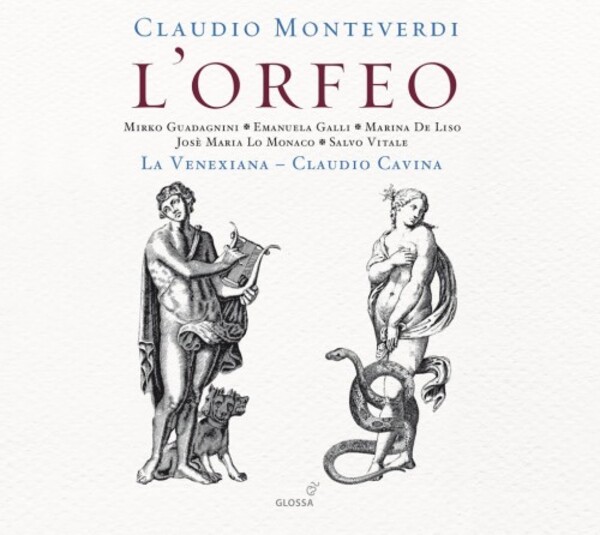 As part of their comprehensive survey of the music of Claudio Monteverdi, Claudio Cavina and La Venexiana delivered an exceptional version of LOrfeo, a reading which had been honed by their trailblazing interpretations of the composers madrigals.

This highly-esteemed recording of the favola in musica  critics applauded and fêted it in many different countries  subsequently dropped out of the catalogue and Glossa is very pleased to have the opportunity to return it there as part of this years 450th anniversary commemorations of the composers birth.

The seductive power of Claudio Cavinas interpretation lay, in part, in his choice of orchestral colours but also in his shaping of the mythical story of the shared love of Orfeo and Euridice; the latters death and descent into the Underworld; and the formers efforts to rescue from there. Into that reading Mirko Guadagnini excelled with nobleness in the title role, and Emanuela Galli brought sensuality to that of Euridice (and fervour to her Musica), whilst other key roles were taken by Salvo Vitale, Marina De Liso and Josè Maria Lo Monaco. In keeping with his habits of the time Claudio Cavina also found a small part for he himself to sing: the third Shepherd in this case  a reminder not just of his own talents and legacy on record as a singer but of La Venexianas tight-knit ensemble approach also.

Claudio Cavinas LOrfeo has lost nothing of its grandeur in the passing of the years and is as recommendable today as when it was first issued in 2006.

Cavinas wonderful account goes straight to the top of the list of recommended recordings. Do not miss it.  Editors Choice, Gramophone, November 2007