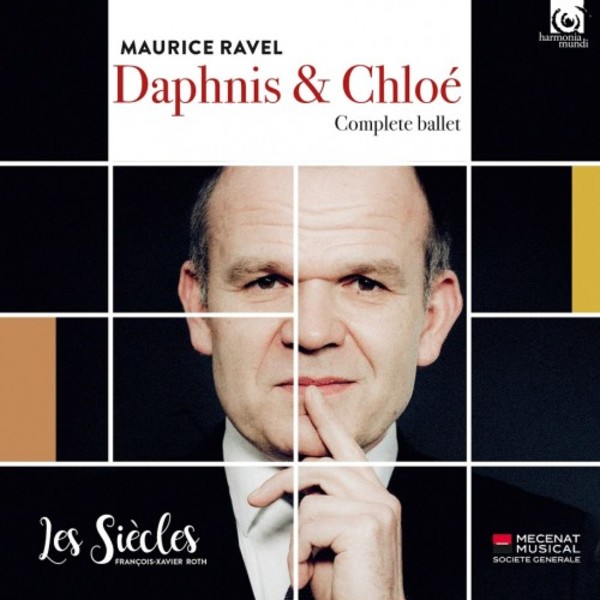 Daphnis and Chloé is conceived as a ballet in one act and three parts, and tells the story of the love between the shepherd Daphnis and the shepherdess Chloé. A warlike tableau is framed by two pastoral ones: in the first, Daphnis and Chloé acknowledge their mutual love following a dance contest that provokes the jealousy of each of them in turn. The interruption of a group of pirates, who abduct Chloé, puts an end to the rejoicing. The second tableau depicts the pirate camp; the captive girl is commanded to dance for her abductors. In the final tableau, Chloé is restored to Daphnis through a miracle of the god Pan, whom the nymphs have called on for help. After miming the tale of Pan and Syrinx, the young lovers let their joy burst forth in a General Dance of dazzling orgiastic virtuosity.

The orchestral forces are the largest Ravel ever employed and he adds a mixed chorus that sometimes hums and sometimes sings. As we have come to expect, François-Xavier Roth, in his début for Harmonia Mundi, has gone through Ravel's much-amended score with a fine-tooth comb and subsequently showed himself capable, in a historically informed performance, of reproducing with the musicians of Les Siècles all the transparency and stylistic precision one could wish for in Ravels masterpiece.

"Daphnis et Chloé is part of the large-scale project we embarked on with Les Siècles in 2009: the odyssey of the Ballets Russes. To celebrate the centenary of that incredible artistic adventure, we wanted to reconstruct the Parisian orchestra that premiered these works in order to restore their original colours... As with each work of the Ballets Russes that weve played so far, we noticed just how remarkably the instruments of Ravels time, those French-built instruments typical of the early twentieth century, do justice to this music and make it meaningful!" - François-Xavier Roth

Taken from live concerts on a 2016 European tour, this new recording of Ravels complete ballet Daphnis et Chloé is among the most remarkable interpretations on disc in terms of sheer clarity. François-Xavier Roth and the period-instrument musicians of Les Siècles lavish marvellous care and attention on what is surely one of Ravels most sensuous scores. With all the woodwind, brass, percussion and harps detailed in the accompanying booklet (not just by make but also date or serial number), this is one of the most French Daphnises out there, and clearly a labour of love on the part of all concerned. Strings and woodwind sound wonderfully sweet, while the brass make their impact distinctively without ever drowning out their colleagues.

Roth and Ravel expert Jean-François Monnard went through the score afresh, weeding out some tenacious printing errors over a century after the works première. There are no big surprises, but the beauty and transparency of this account, especially in the more lyrical dance episodes and also in the bacchanal-like closing Danse générale, place this recording in a select band of modern recordings to set alongside such classics as Monteux (with the LSO) and Munch (Boston Symphony Orchestra). At moments, there are even hints of a Munch-like élan, if not sheer abandon. But the character of the music throughout, from the gently erotic dances to the raw humour of Dorcons Danse grotesque and the thrill of the pirates Danse guerrière, is exceptionally vivid. There is little need to consult a synopsis when the tone-painting and realisation is this tangible, and the supernatural moments (for example when the spirits of Pan intervene to rescue Chloé, track 16) have a spine-tingling immediacy.

The instrumental playing throughout is pure joy, not least the principal flute of Marion Ralincourt, and the truly French horns led by Fabien Norbert. Lower woodwind may lack the sheer pungency of Cluytenss famous account with the Paris Conservatoire Orchestra, but the timbres of the instruments will still be startlingly refreshing for most listeners. So, too, will the 32-voice chorus, somewhat smaller than on most other recordings, and recorded fairly close (only just behind the scene in many cases), adding an unexpectedly human element to this mythical tale. The emotional pain of the voices-only Interlude following Chloés abduction (track 11) has rarely been as perfectly captured.

Above all, Roth and his players succeed more than any of the competition in recapturing Ravels own vision of ancient Greece, which assuredly owed more to French artists of the late 18th century than to choreographer Michel Fokines more authentically classical view based on Longuss original romance. It was a vision that made the genesis of this symphonie chorégraphique more than usually turbulent for the composer, and he would surely be delighted with this performance.

Thankfully, there is no hint of audience noise, nor indeed of the apparently patchwork nature of the recording (taken from several performances). The sound is pleasingly immediate, the presentation first-class. Those who have been following Les Siècles traversal of the early 20th-century Ballets russes repertoire will snap this up without hesitation; so should others, for among modern accounts and even alongside the classics mentioned above it is utterly distinctive, ravishingly beautiful, and ardently compelling.

Roths recording is taken from Les Siècless European tour last year though, unlike the performance of Daphnis they gave at last years Aldeburgh festival, it does include the wordless chorus (provided by Ensemble Aedes) that Ravel made optional in concert. With the strings playing on gut and wind instruments from the early years of the 20th century (all detailed in the sleeve notes), the sound is fabulously transparent; every detail of the woodwind and brass articulation, so minutely specified by Ravel, is clear. Roths approach may be too cool for some tastes  theres not much Dionysian abandon about it  but, as a guide to one of the most brilliant of all orchestral scores, its hard to fault.  Andrew Clements
The Guardian 6 April 2017

We dont know what the orchestral sound was like at its 1912 Paris premierebut many listeners will be familiar with the 1959 LSO recording by the original conductor, Pierre Monteux, long a treasure of the Decca catalogue. Comparisons are instructive. Les Siècles French-built woodwind and brass instruments from the early 20th century (documented in the booklet) provide greater tonal sweetness, especially the Selmer trumpets, which dont dominate textures as much as the incisive LSO brass. Lean gut strings achieve feathery lightness. ... François-Xavier Roth teases a much more expansive opening than Monteux, a slow burn leading to an ecstatic first choral entry. He is often more languorous, the performance nearly four minutes slower than the Decca account. However, Roth attacks the Danse guerrière with more vim and also whips up a faster bacchanalian finale. With fine choral contributions from the Ensemble Aedes, this new recording is highly recommended.  Mark Pullinger
Gramophone June 2017