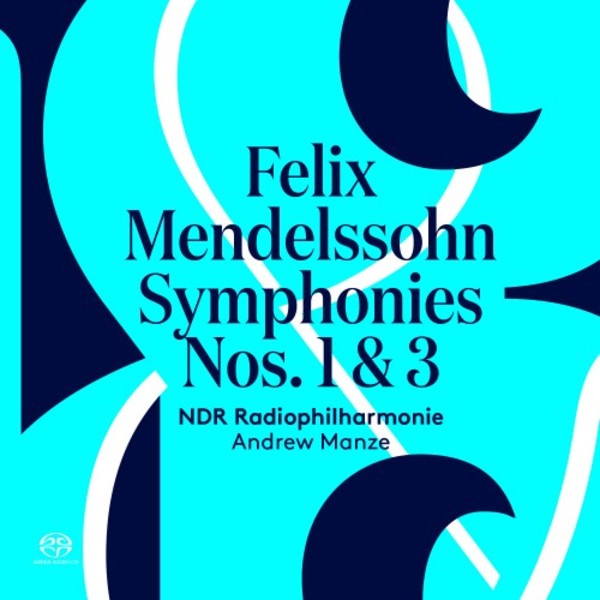 Mendelssohn's warmly lyrical and evocative Scottish Symphony is paired with his confident and precocious First Symphony for the first in a series of recordings in multi-channel surround sound for Pentatone by the conductor Andrew Manze and the NDR Radiophilharmonie.

Inspired by his visits to Scotland and the Hebrides and the romantic novels of Sir Walter Scott, his outstanding Symphony No.3 in A minor ("Scottish") is a colourful reminiscence of its rugged landscapes steeped in history, and an affectionate homage to the proud Highlanders he met there. It was an instant success on its first performance and rivals the popularity of the overture The Hebrides, also inspired by the splendour of Scotland. No less impressive is his masterly Symphony No.1 in C minor, composed when he was just 15 years old. From its noisy and impetuous opening to its triumphant conclusion, this confident and adventurous work shows the influence of Mozart, Haydn and Weber but the effect is unmistakeably Mendelssohnian with fugal passages, unforgettable melodies and busy, inventive scoring.

Renowned for his boundless energy and scholarly knowledge and with many critically acclaimed recordings in a broad repertoire, Manze is celebrated as one of the most stimulating and inspirational conductors of his generation. In September 2014 Andrew Manze became the Principal Conductor of the NDR Radiophilharmonie in Hannover and immediately made headlines.

"Whatever the exceptional Andrew Manze asked for," wrote the Leipziger Volkszeitung, "was delivered in real time: wonderfully delicate strings, spotless, yet warm-sounding woodwind ... the result was detailed and rich in contrast."

"Manze's take is wholly individual," wrote the Guardian. "[Brahms's symphonies] burst with life, by turns wistful, yearning, sharp-edged and blisteringly incisive ... this is the composer reinvented for the 21st century."

"If it continues like this," wrote the Neue Presse in November 2014, "the NDR Radiophilharmonie will soon be looked at with envy by the rest of the musical world, as what new Principal Conductor Andrew Manze is brewing up ... can be deemed sensational."

I have to admit I'd never heard Mendelssohn's First Symphony before, but can't imagine it more convincingly played and conducted
The Sunday Times 26 March 2017