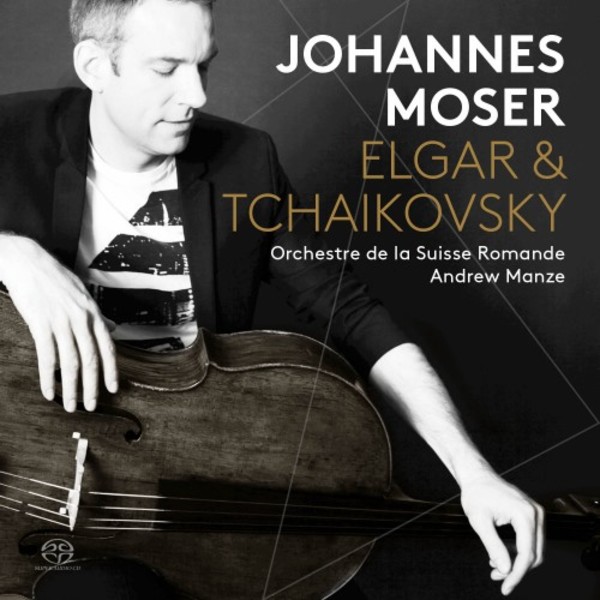 The profoundly moving, elegiac lyricism of Elgar and the wistful charm and brilliance of Tchaikovsky are on full display in this irresistible new release from Pentatone played with consummate virtuosity by the German-Canadian cellist Johannes Moser with the Orchestre de la Suisse Romande under Andrew Manze.

Composed at the end of the First World War, Elgars powerful Cello Concerto in E minor is one of his best-loved and most deeply-felt works. The soloists wrenching chords which open the work announce a mood of profound resignation and loss; gone is the youthful swagger of his earlier works, replaced instead with lonely introspection and longing, especially in the sublimely beautiful Adagio. The cello is given free rein in the vigorous final movement but the opening mood prevails as an anguished outburst from the cello brings the work to a close.

No such dejection hangs over Tchaikovskys delightful Variations on a Rococo Theme which ooze elegance, ineffable charm and daring displays of technical brilliance. While the Pezzo capriccioso finds Tchaikovsky in a more restrained mood, with the Nocturne and Andante cantabile he wears his romantic heart full on his sleeve.

The cellist Johannes Moser is no stranger to these works. Winner of the top prize at the 2002 Tchaikovsky Competition, he was also awarded the Special Prize for his interpretation of the Variations on a Rococo Theme. Described by Gramophone as one of the finest among the astonishing gallery of young virtuoso cellists and by the LA Times as a musician who connects with the audience in a way that only great artists do, this is Mosers third outing for Pentatone.

His first album of concertos by Dvořák and Lalo was widely praised for his performance of enormous flair and effervescence (BBC Music Magazine) and his dazzling virtuosity, free, passionate phrasing and immense energy  that recalls Pablo Casals iconic 1937 recording (Strings).

Moser gives us an exciting, high-tension ride with an impressive sense of structure. He's a musician of alacrity, power and style: virtuosic passages benefit from his fleet effortlessness. - BBC Music Magazine on Dvořák and Lalo PTC5186488

The recorded sound is, like the playing, absolutely topnotch... this new version is up there with the best of them and could happily serve as a credible first choice. - Gramophone on Dvořák and Lalo PTC5186488

Its Tchaikovskys sunny Variations on a Rococo Theme that comes off best. Moser plays the composers original version, and sets off at a brisk trot  rococo is not going to be a byword for prissy. But the lightness is balanced by a gently yearning lyricism, and he shapes the minor-key variation into one long, seamless line. The playful exchanges between cello and orchestra in the next variation are beautifully handled; throughout, Andrew Manze and the Orchestre de la Suisse Romande are supportive at every turn.  Erica Jeal
The Guardian 23 March 2017

A most unusual account of the Elgar Concerto, one thats both musically gripping and recorded at relatively close quarters. ... Altogether a wonderful CD, then, both major works granted recordings that are among the finest weve hard in recent years, the Elgar certainly as recommendable as either Sol Gabetta or Isserlis.  Rob Cowan
Gramophone May 2017

The profoundly moving, elegiac lyricism of Elgar and the wistful charm and brilliance of Tchaikovsky are on full display in this irresistible new release from Pentatone...  Classic FM Drive Discovery of the Week
Classic FM 27 March 2017