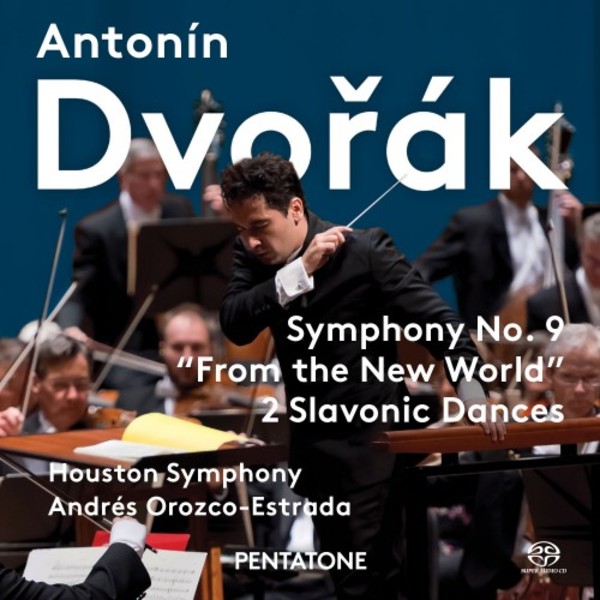 Dvořáks New World Symphony is counted among the most successful and distinctive symphonies ever written and it loses none of its drama or appeal on repeated playing. Inspired by American spirituals and Henry Longfellows epic poem The Song of Hiawatha, this infectiously tuneful work with its brilliantly colourful orchestration and rhythmic verve has its creative wellspring in Dvořáks own homesickness. It was condescendingly described by his critics as a Czech composers impression of the country but its qualities were never in doubt and its inventiveness and warmth radiate from every page. From beautiful, wistful melodies, to unfettered exuberance and glorious, sustained climaxes, this extraordinary symphony has it all.

Dvořáks evergreen Slavonic Dances, Op.46 (of which two are heard in this recording) are equally popular with audiences. Responsible for establishing Dvořáks international reputation, these utterly charming pieces overflow with appealing melodies and catchy rhythms, their freshness and simplicity concealing their artful construction.

Andrés Orozco-Estrada is one of the most sought after conductors of his generation. Music Director of the Houston Symphony and Chief Conductor of the Frankfurt Radio Symphony Orchestra, he is also Principal Guest Conductor of the London Philharmonic Orchestra. He has been widely praised for his style and command, Die Presse remarking The orchestra was on top form, displaying precision and clarity in equal measure  packed with drama and finely balanced under Andrés Orozco-Estradas direction. (August 2016) This is Orozco-Estradas fifth recording for Pentatone. His earlier discs of Dvořák symphonies were described as Vivid and colourful, overall well balanced (Pizzicato), and an interpretation full of theatricality, with a sure sense of the monumental (Gramophone).

Future releases from Pentatone with Orozco-Estrada in 2017 include Haydns Die Schöpfung with the Houston Symphony, and Richard Strausss opera Salome with the Frankfurt Radio Symphony Orchestra.

When it comes to sheer vitality and warmth, this Texan ensemble doesnt hold back Andrés Orozco-Estradas is an interpretation full of theatricality, with a sure sense of the monumental. Its all there in the broad sense, in his far-sighted approach to structure and pacing even if some of it verges on the brash, theres no denying that Orozco-Estrada knows how to fire up his army - Gramophone on Dvořák 7 & 8 PTC5186578