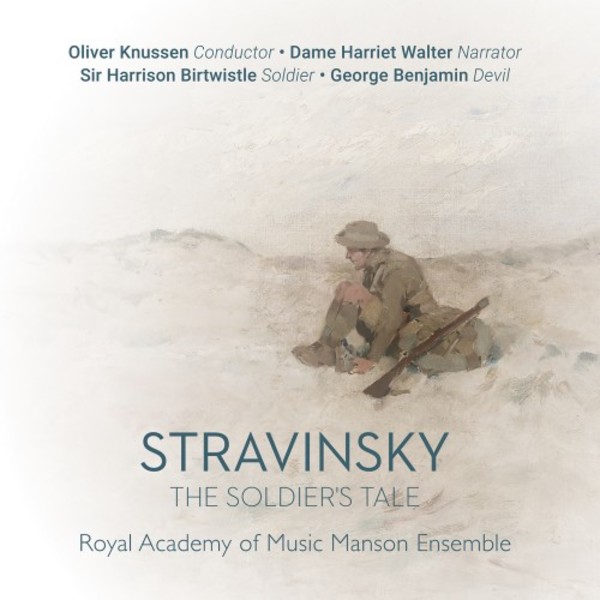 The fifth recording from the talented students of Londons Royal Academy of Music pairs Stravinskys The Soldiers Tale with music by Harrison Birtwistle and Peter Maxwell Davies.

For his debut recording with Linn, conductor Oliver Knussen has assembled an impressive cast of contemporary composers for The Soldiers Tale: Harrison Birtwistle as the soldier and George Benjamin as the Devil, with actress Dame Harriet Walter as the narrator.

The longest work on this disc, The Soldiers Tale mixes fiendishly difficult changes of time signature with Stravinskys newly discovered love of jazz with melodies which echo his larger pre-war scores. It is also a work that demonstrates immense clarity and moving simplicity at times, and a sardonic wit at others. With such a starry cast this recording will be of particular interest to those with an interest in contemporary music, especially considering the addition of two new Birtwistle world premiere versions of Chorale from a Toy Shop written specially for the recording.

One of the pre-eminent composer-conductors in the world today, Oliver Knussen CBE is presently Sir Richard Rodney Bennett Professor of Music at the Royal Academy of Music. The recipient of many honours and awards, including the Nemmers Prize in 2006 and the RPS Conductor Award in 2009, he has served as Artistic Director of the Aldeburgh Festival (198398), Head of Contemporary Music at the Tanglewood Music Center (198693), Principal Guest Conductor of the Hague Residentie Orchestra (199397), Music Director of the London Sinfonietta (19982002) and Artist-in-Association with the BBC Symphony Orchestra (200914). In 2012 his sixtieth birthday was celebrated with special events in Aldeburgh, Amsterdam, Birmingham, London and Tanglewood and he has recorded more than fifty CDs for labels including Deutsche Grammophon, Decca, Virgin and NMC.

seriously impressive playing from students of the Royal Academy of Music... the ensemble sound is elegant and refined. - The Guardian

From the podium it was given clear direction and guided by Knussens equally keen ear. - BachTrack

Knussen obtained tight ensemble here in a performance of real tenderness. - The Telegraph

Masterminded by conductor Oliver Knussen and producer Jonathan Freeman-Attwood, this recording of Stravinskys The Soldiers Tale is the latest in a fruitful collaboration between the Linn label and the Royal Academy of Music (of which Freeman-Attwood is Principal). The inspired cast was originally to have included Sir Peter Maxwell Davies in the role of the Devil, but his deteriorating health at the time of the sessions sadly prevented his participation. However the composer George Benjamin gamely stepped up to fill the breach, and so we have his sly, suave, condescending Devil pitted against Sir Harrison Birtwistle, no less, as a magnificently laconic, richly Lancastrian Soldier. Their joint participation alone is enough to generate a high profile for the disc, but most of the spoken-word sections in this full version of the score devolve to the Narrator. Linn have again scored trumps by engaging of Dame Harriet Walter, who had already taken all three speaking roles in concert. She is consistently involving and involved, helped by an ideal balance even in the louder passages. The English translation of C.F. Ramuzs French text by Michael Flanders and Kitty Black remains true to the spirit of the original while avoiding some of its arch stylisation, so this starry performance of the Tale can thus be enjoyed both as straightforward literal narrative and as a Faustian fable.

The RAMs excellent contemporary music group, the Manson Ensemble shine brilliantly in their recording debut, bringing out all the spikiness and wit of Stravinskys score. They seem to revel in the physicality of the dance movements (including the celebrated Tango, Waltz and Ragtime), while the moments of reflection are played with the greatest sensitivity and careful dynamic control. Knussen keeps rhythms buoyant, and special mention must be made of Eleanor Corrs supremely agile violin playing, as well as Christopher Hart on cornet and Jacob Brown, wonderfully alert on the varied percussion. Rarely has Stravinskys septet scoring sounded so alive, responsive and daring as this: add in the celebrity cast and Linn have a sure-fire winner.

If that isnt enough to whet your appetite, the Tale is imaginatively framed by miniatures from Stravinsky, Davies and Birtwistle. Acting as a prelude is a group of celebratory pieces by or for Stravinsky: his brief, arresting Fanfare for a New Theatre for two trumpets (1964); Knussens marvellously delicate arrangement of Daviess Canon ad honorem Igor Stravinsky of 1967; and Birtwistles solemn but subtly complex Chorale from a Toy Shop, likewise composed for Stravinskys eighty-fifth birthday and now updated by Birtwistle in versions for winds and strings.

After the Tale, as it were reflecting on the Soldiers ultimate demise, are four treasurable commemorative miniatures, once again by or for Stravinsky. His bleak Double Canon in memory of Raoul Dufy is followed by his Epitaphium for Prince Max Egon zu Fürstenberg, exquisite modernist gems both composed in 1959. Finally, a pair of works written for the Stravinsky memorial issue of Tempo magazine in 1971: Birtwistles melancholic Tombeau  in memoriam Igor Stravinsky and Daviess enigmatic Canon in memoriam Igor Stravinsky, in which serial technique melds with plainsong-like fragments. All are superbly shaped and shaded by Knussen and the Manson Ensemble musicians, acting as a double tribute to both Stravinsky and Davies.

The programme of the disc as a whole is hugely satisfying, engagingly presented and performed. As the centenary of The Soldiers Tale approaches, this new account goes straight to the top of the pile for those wanting the complete work in English, for the sheer quality of both performance and couplings, a dazzling account of a modern classic.

On this recording Harriet Walters lively Narrator is paired with two august composers in the other speaking roles, Harrison Birtwistle as a wryly grudging Soldier and the bright-eyed Devil of George Benjamin.

Theres an American tradition of asking venerable composers to take the speaking roles in Stravinskys 1918 Faustian music-theatre fable The Soldiers Tale. Babbitt and Carter did it as nonagenarians; Copland played Narrator to the Devils of John Cage and Virgil Thomson. The custom is honoured here with Oliver Knussen conducting Harrison Birtwistle as a superbly laconic Soldier  it sounds as though he couldnt care less when his luck is down; the despondency is glorious  and George Benjamin makes a deliciously supercilious Devil. ... Harriet Walter narrates adeptly; the playing of the Royal Academys Manson Ensemble is taut, fearless and detailed.  Kate Molleson
The Guardian 16 March 2017

This remarkable disc sets Stravinsky's music-theatre piece The Soldier's Tale beside 12 minutes of miniaturised instrumental and memorial music by him and by Maxwell Davies (two fascinating, cryptic canons) and Birtwistle...
The Sunday Times 19 March 2017

... the young players of the Royal Academy really revel in these and play with guts and a swagger which must be just what Stravinsky intended. Oliver Knussen does the honours from the podium with his customary skill.
MusicWeb International 11 May 2017

The present team would seem committed to the mysterious timelessness of the entertainment [The Soldiers Tale] and its abstractly progressive nature. The novel idea was to cast the surviving icons of Mancunian modernism in supporting roles. Sadly Peter Maxwell Davies was too ill to take part but George Benjamin stepped in as an aptly insinuating, youthful-sounding Old Nick. Harrison Birtwistle, determinedly Lancastrian, is a more reticent, deadpan Soldier.

The complementary, commemorative shorter pieces, including two Birtwistle items written expressly for the recording, are as exquisitely turned as might be expected from this source. They are almost all designedly cool. Not that theres any lack of joie de vivre in the main work. No complaints about the intimate, vivid sound, nor the entertaining producers note from Jonathan Freeman-Attwood. ... Anyone who knows Knussens magical disc of seemingly intractable late Stravinsky (DG, 10/95) or his unbeatable Fairys Kiss (DG, 11/97) will want this one too.  David Gutman
Gramophone March 2017