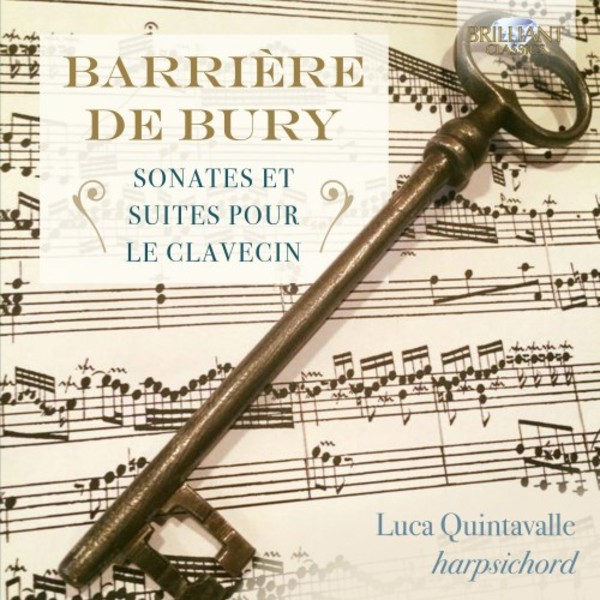 The output of Jean Barrière (1707-1747) largely focuses around his own instrument, the cello, for which he wrote several books of suites and sonatas that have received sporadic attention on record. His work for harpsichord alone is much less well-known, though hardly less stylish. Like his contemporaries Jacques Duphly and Jean- Phillippe Rameau, Barrière entitled one of his pieces La Boucon for Anne-Jeanne Boucon, who later married Jean-Joseph de Mondonville: she must have been a woman of enviable poise and dignified beauty to judge from the music written in her honour.

The first five of his six sonatas on this album are not French dance suites but transcriptions of Italian-inspired sonatas which he had originally composed for the smallest and highest instrument of the old family of viols, the pardessus de viole. The Italian influence can be traced in the bold and often unprepared dissonances which lend the sonatas both charm and unpredictable drama; the elaborate ornamentation, too, derives at least as much from the florid violin writing of Corelli and Geminiani as from the French harpsichord tradition.

Bernard de Bury is a figure whose music was lost to history until very recently, when in 2009 the scholar-musician Ruta Bloomfield transcribed these pieces from obscure manuscripts and gave them their first performances in modern times. De Bury (1720-1785) was born into a musical family in Versailles, and there he stayed to serve the court. There are four suites, which in the style of Rameau and Couperin describe with wit and tender affection characters from ancient mythology and the composers own time, with melodies almost buried beneath cascades of exquisite decoration. In his dedication, de Bury states that he was fifteen years old when he wrote the suites, though such precocious youth could not be guessed from the music itself, which is far from immature. This coupling is unique on record; only one previous recording of de Burys work is presently available.