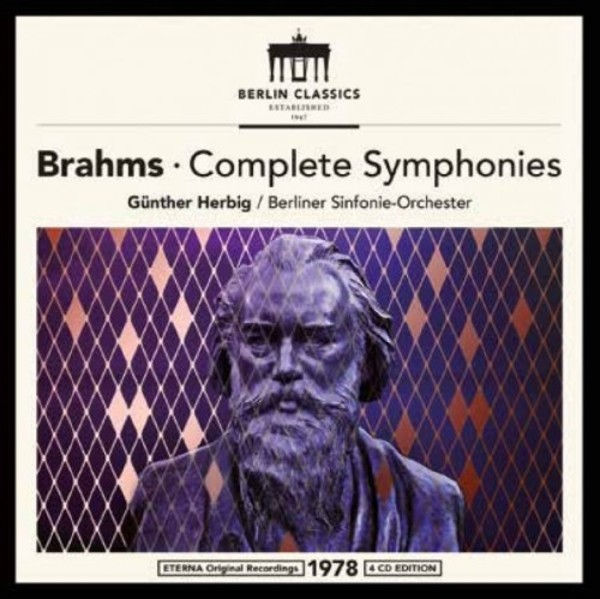 This complete Brahms cycle from the year 1978 does more than consolidate a chapter in the recording history of the Eterna classical music label. It also returns to the original sound of the (former) Berlin Symphony Orchestra, for which the conductor of this recording  Günther Herbig  had so much regard. In a time-consuming process, the analogue Eterna master tapes have been newly processed and remastered for the first time in over 20 years.

Günther Herbigs time as principal conductor of the orchestra ended in 1983 after a dispute with the leading political organs of the GDR. His move to the USA fast-tracked his international career. He was appointed head of the Detroit Symphony Orchestra, and later directed the Toronto Symphony Orchestra. Tours to Japan, South America and Australia and conducting commissions with major European and American orchestras added lustre to his international reputation. Günther Herbig celebrated his 85th birthday on 30 November 2016.

Todays Berlin Konzerthaus Orchestra was founded in 1952 as the Berlin Symphony Orchestra in East Berlin (the Soviet sector of the city) and won international recognition under the direction of Kurt Sanderling in the 1960s and 1970s. Sanderling faced significant hurdles to the development of the orchestra  once the Berlin Wall went up on 13 August 13 1961, about two-thirds of its musicians were no longer available, as they lived in West Berlin  making his achievement all the greater. The orchestra marks its 65th anniversary in 2017.

The Brahms cycle thus provides ample reason to celebrate  as a document of the teamwork between the Berlin Konzerthaus Orchestra and as proof of the excellence of its former principal conductor  and because, for the first time, its original sound has been faithfully renewed. The bonus CD presents two works each by Arnold Schoenberg and Witold Lutosławski, the release of which on gramophone records in the German Democratic Republic was of more than discographical significance.