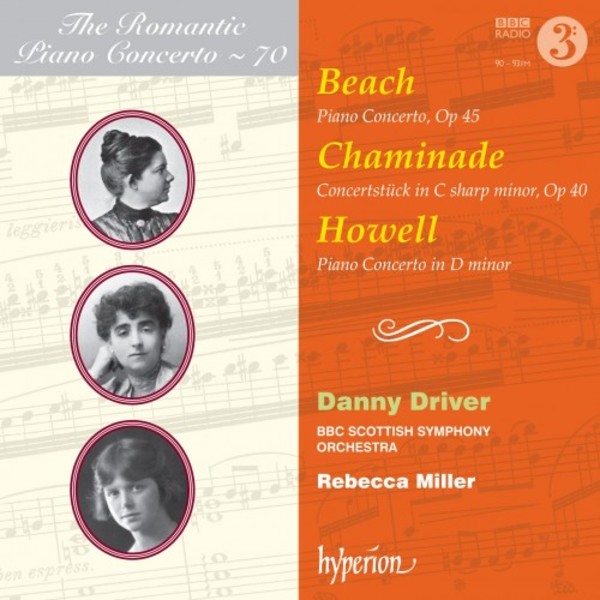 The centrepiece of volume 70 in Hyperions Romantic Piano Concerto series is Amy Beachs Piano Concerto in C sharp minor (1897-99), a welcome new recording of a work that has appeared on disc before but deserves far wider currency. Cast ambitiously in four movements, including an opening Allegro lasting over a quarter of an hour, it is a substantial piece, its technical challenges a tribute to Beachs own considerable prowess as a pianist: her early performing ambitions were thwarted by a puritanical mother and subsequently by a conservative (and considerably older) husband. The music itself contains hints of this struggle, often pitting the soloist against the orchestra in competition, to powerful effect in the opening movement. Theres a particularly engaging perpetuum mobile Scherzo, with a wonderfully atmospheric opening, and the soloists figuration burbling along doggedly against the orchestral dance. The heady Romantic lyricism of the third-movement Largo eventually gives way to a sparklingly playful finale, with a triumphant close hinting that all will be well  as indeed it was for Beach the performer following the deaths of her mother and husband. Its a happier husband-and-wife team that take on the roles of soloist and conductor respectively for this recording, with pianist Danny Driver rising magnificently to the imposing challenges of Beachs cadenzas, and Rebecca Miller coaxing some lovely playing from the BBC Scottish Symphony Orchestra  one of Hyperions workhorses for the series, but here sounding far from routine.

The couplings are slighter works, but well worth investigating. Cécile Chaminade (1857-1944), ten years Beachs senior, similarly had to battle against the prejudices of her day; her Concertstück of 1888 opens in a manner that immediately recalls Wagners Flying Dutchman overture, but gives way to music of considerable charm as well as Lisztian flourishes. Once again, Driver and Miller between them prove persuasive advocates, and this engaging 15-minute work certainly deserves more frequent outings. From a later generation, the name of Dorothy Howell (1898-1982) is barely known today, but almost a century ago her symphonic poem Lamia (1919) was championed by Sir Henry Wood and performed at no fewer than seven successive Proms seasons! Her 1923 Piano Concerto in D minor (1923), cast in a single movement but three recognisable sections, was judged less successful at the time, but like the Chaminade it has an arresting opening and some highly effective orchestral and solo writing, and it makes a fine companion piece to the other two works here. Recordings and presentation are well up to Hyperions customary standards, and the sponsorship of the Ambache Charitable Trust has done us all a service in supporting three works that fully deserve to be part of this series. Buy this disc for the Beach, and for Drivers superbly clear-headed playing, but relish the bonuses of the Howell and Chaminade!

Pick of the bunch is the Concerto by Amy Beach... Its a big, ambitious piece in four movements, with a perpetual-movement scherzo before the deeply felt slow movement. It handles its Dvořák-like idiom with confidence and individuality, and the virtuoso piano writing is tremendously effective.  Anthony Burton
BBC Music Magazine March 2017

[Beachs] Piano Concerto has the heft and torrent of music that needs to be written and Danny Driver plays it with clarity and steel, absolutely unsentimental but flecked through with empathy. ... This release ... also includes Dorothy Howells D Minor Concerto, a gracious throwback written in 1923, and the concertstuck by Cécile Chaminade. Ambroise Thomas liked her music: This is not a woman who composes, he declared, but a composer who is a woman.  Kate Molleson
The Guardian 2 March 2017

It is little to do with Danny Drivers gender that allows him to far outshine two earlier champions of the Amy Beach Concerto who happen to be women: Marie Louise Boehm ... and Joanne Polk ... This is a big, virtuoso vehicle demanding great endurance and a bravura technique ... Driver surmounts these demands with real artistry and, in the lovely slow movement, immense sensitivity. ... In Drivers hands [Chaminades Concertstück] is enchanting  as indeed is this whole disc, a worthy addition to this series, launched more than a quarter of a century ago.  Jeremy Nicholas
Gramophone March 2017