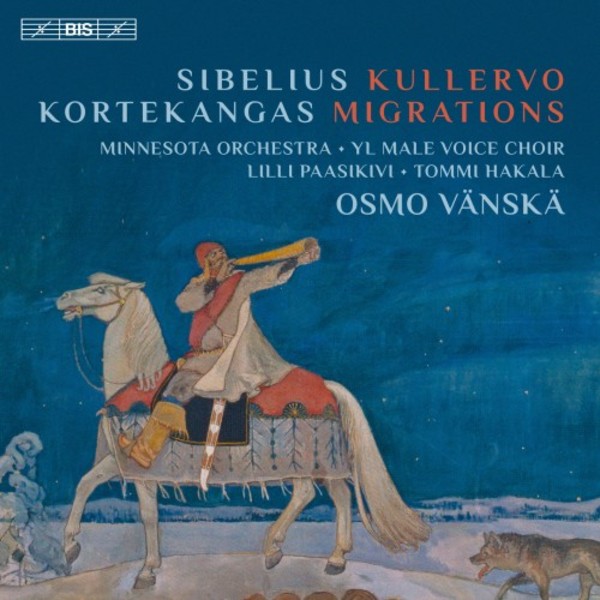 The Great Migration  as it is sometimes called  of Finns to the United States began some 150 years ago. Many of them settled in the Mid-West, and especially in the so-called Finn Hook, consisting of parts of Minnesota, Michigan and Wisconsin. To celebrate this, the Minnesota Orchestra under its Finnish music director Osmo Vänskä commissioned the composer Olli Kortekangas to compose a work on the theme of migration, of a scale and nature suitable for performance alongside Jean Sibeliuss great Kullervo. Discovering the work of the Minnesota-based poet Sheila Packa, herself of Finnish descent, Kortekangas composed Migrations for mezzo-soprano, male voice choir and orchestra, the same forces as in Kullervo, with the exception of the baritone soloist in that work. An all-star Finnish cast  soloists Lilli Paasikivi and Tommi Hakala and the celebrated YL Male Voice Choir  joined the Minnesota Orchestra and Osmo Vänskä for three concerts in February 2016, and captured by a recording team from BIS the memorable performances can now be enjoyed by a wider audience.

Sibelius began working on Kullervo during his student days in Vienna in 1891, finding his inspiration in the Kalevala, Finlands national epic. In a letter home to Finland he wrote about a new symphony, totally in the Finnish spirit and the work is often regarded as the first successful example of a Finnish national musical language. In spite of what Sibelius wrote in his letter, the five-movement work is usually regarded as a symphonic poem, but with a duration of c.80 minutes Kullervo certainly has the scale of a large symphony, and as such the present performance forms a worthy appendix to the highly acclaimed Sibelius cycle which the orchestra and Vänskä brought to a close with the recent release of Symphonies Nos. 3, 6 and 7. As a fitting close to this two-disc set, and to the concerts in Minneapolis Orchestra Hall, the orchestra performs Sibeliuss Finlandia, with the YL Male Voice Choir joining in in the famous hymn section.

[Osmo Vänskäs] new account of Kullervo is conceived very much along the same lines as his first, with an absolute command of the 80-minute span, with its elements of symphony, cantata and opera. Tempi are more or less the same as before, though perhaps instrumental detail is highlighted more obviously this time; whether thats down to Vänskäs conducting or to the balance of the recording is hard to say.

As on the previous recording, the mezzo soloist in the central scena for Kullervo and his sister/lover is the thrilling Lilli Paasikivi, again with the Helsinki University-based YL Male Voice Choir providing the narration; Tommi Hakala is the baritone this time.  Andrew Clements
The Guardian 23 February 2017