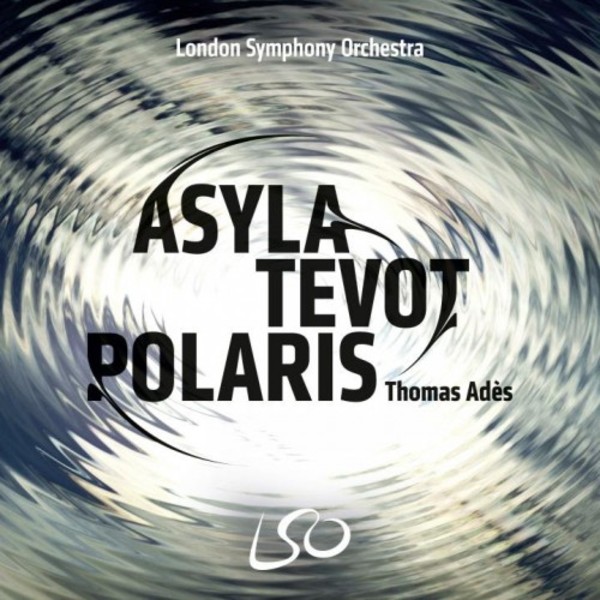 For his LSO Live debut, Thomas Adès, the acclaimed conductor, pianist and composer, conducts all of his seminal Trilogy works - Asyla, Polaris and Tevot. Recorded in 2016 during his first LSO Composer Focus, this is the first time all three works have been presented together on one album, offering a unique chance to hear the musical development of one of the worlds foremost contemporary composers, in Dolbys new Atmos surround sound format.

Composed in 1997 and winner of the 1999 Grawemeyer award, Asyla is the earliest of the Trilogy pieces, and one of the works that announced Adès as a major new voice. Sir Simon Rattle, a long-time champion of the composer, conducted the works premiere with the CBSO as well as programming it in his inaugural concert as Artistic Director of the Berlin Philharmonic. The title is the plural form of the word asylum, and plays on the dual meaning of both madhouse and sanctuary. Typical of his orchestral works, it utilises a large orchestra (including six percussionists and a variety of treated pianos) to achieve an array of colours, textures and timbres. It also showcases Adess wide-ranging influences, with a four-on-the-floor techno drumbeat as the impetus behind the famous Ecstasio movement.

Tevot is a one-movement symphony that builds upon the ideas of Asyla and pushes the players to the limits of their technical ability, with long passages written in stratospheric registers. Again, there is a dual meaning at play in the title, as Tevot is the Hebrew word for bars as well as closely related to the word used in the Bible when referring to Noahs ark. Adès himself explains: I liked the idea that the bars of the music were carrying the notes as a sort of family through the piece. And they do, because without bars, youd have musical chaos. But I was thinking about the ark, the vessel, in the piece as the earth. The earth would be a spaceship, a ship that carries us - and several other species! - through the chaos of space in safety. It sounds a bit colossal, but its the idea of the ship of the world.

The final Trilogy work, Polaris, was composed in 2010 and is subtitled A Voyage for Orchestra. Taking the North Star as its inspiration, despite a relatively short running time it conjures up a definite sense of vastness, with musicians placed offstage to enhance the sense of space. The piece is built up from a simple, looping pattern of notes in the piano, that evolves to suggest a massive spiral with musical magnetic fields expanding, exploding and beautifully rearranging themselves.

The album also includes the Adès miniature Brahms. Sung here by baritone Samuel Dale Johnson, it is an
anti-homage to the composer inspired by the cold logic of his music, taking his compositional compulsions to extreme conclusions.

An exceptional concert which was totally convincing both in performance and the quality of the music being presented. My concert of the year so far. - Bachtrack *****

The centrepiece of this triptych is Tevot, the enigmatic single movement Adès wrote for Rattle and the Berlin Philharmonic in 2007. ... Here, in this LSO performance under the composer in which not a single scrap of the scoring seems to be overlooked, it is followed by Polaris, which brings a much more sure sense of closure. Tevots irresistible weight and beauty, its shining descents and dark upwellings, the flaring Janáček-like trumpet writing and Mahlerian wistfulness, can be appreciated for what they are, and they combine with an absolute refusal to rush or take any shortcuts through the musical argument. Its a score that knows the space and time it needs, and its pacing is totally sure.  Andrew Clements
The Guardian 22 February 2017