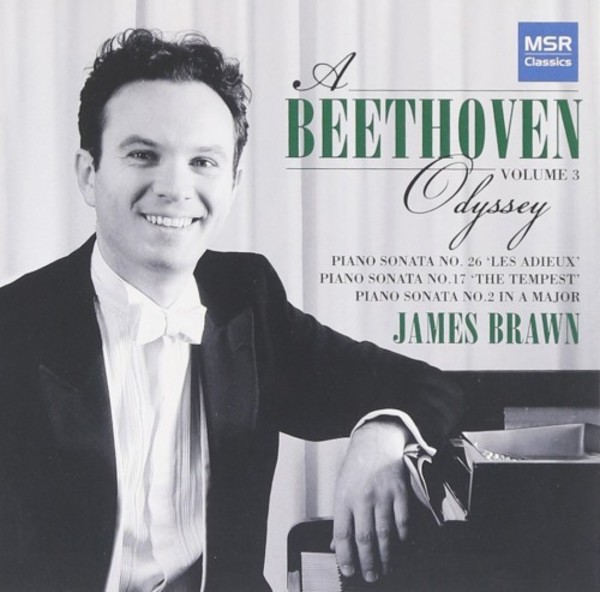 In the summer of 2013, James Brawn travelled two hundred miles from his home in the Cotswolds to Suffolk on the east coast of England near Aldeburgh. His producer, Jeremy Hayes, lives at Potton Hall. Hayes converted a barn on the property into a studio. Surrounded by fields and forest, it is far removed from the routines of daily life, which makes this an idyllic recording location.
The team has just three days to record four Beethoven sonatas: Op.2 No.2, The Tempest, and Les Adieux for volume 3, and Op.78 for volume 4. In order to reacquaint himself with the Steinway piano, James arrives the night before. His longtime piano tuner, Peter Law, joins him. James quickly familiarises himself with the Steinways action and wonderfully warm sound. The entire group  pianist James Brawn, producer Jeremy Hayes, tuner Peter Law, and sound engineer Ben Connellan  convenes in the studio on day one. As with Brawns previous recordings at Potton Hall, he will begin by performing the entire programme without a break. Fully aware of the musical and technical challenges that all performances entail, Brawn feels the usual mixture of trepidation and excitement. Nothing demands more of a pianist than Beethoven! Brawns goal is to create something special, honest and convincing, which means that each note and phrase in every movement must feel and sound just right to him.
The release of A Beethoven Odyssey Volume 3 brings the project to nearly the halfway point. Brawn has opted to include all repeats and therefore expects to record nine volumes, four of which  15 sonatas out of 32 in all - should be completed in 2014.
[Brawn] combines an easy spontaneity and symphonic gravitas in a way rarely encountered on disc since the balmy days of Daniel Barenboim's famous 1960s cycle for EMI. An outstanding Beethovenian: crystal-clear fingerwork, interpretive urgency, harmonically sensitive micro-pedaling, a natural instinct for symphonic structure, arresting yet never over-emphatic sforzandos, super-fast dynamic reflexes, the ability to find wonderment at the way Beethoven re-contextualizes the conventional to create something entirely new and original, and a freshness of spontaneity free of cluttering reverential rhetoric.  Julian Haylock, International Record Review, March 2015
What unites the performances [of the range of Beethoven's Sonatas] is Brawn's authoritative sense of shape and sonority. So far, his playing has been the epitome of lucidity, elegance and drama. There is every reason to expect that his complete set of the sonatas will be a triumphant achievement.  Donald Rosenberg, Gramophone, December 2014