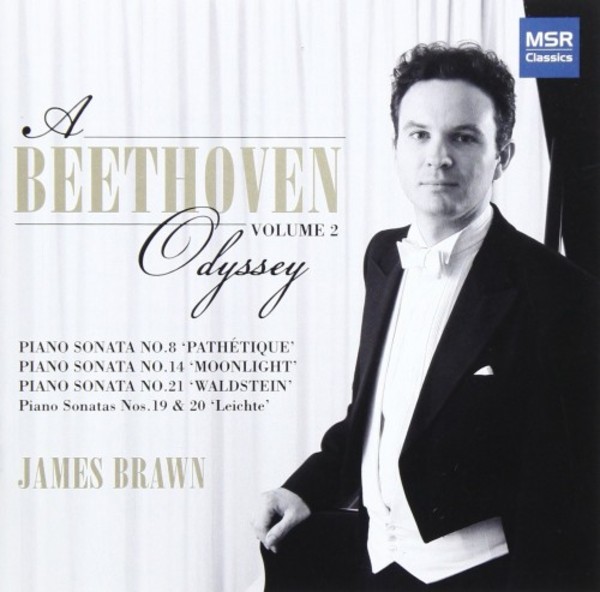 In Volume 1 of A Beethoven Odyssey, several important points were emphasised: these works not only represent the highest expression of Western culture, but also chronicle the composers stormy personal life over a nearly thirty year period. Beethovens thirty-two piano sonatas constitute a core component of every concert pianists repertoire. They are like familiar friends who lastingly accompany pianists on their artistic path.
In the same way that Beethovens spirit profoundly animates ... the performance of these works, James Brawns imaginative interpretations inform this series of recordings. His detailed contemplation of each movement, each sonata, adds something new to the dialogue. At the same time, he exhibits respect for the tradition that traces its origins to the composer himself. This is not surprising because Brawn studied with pupils of Beethoven interpreters like Solomon Cutner, Claudio Arrau, and Rudolf Serkin, all of whom had a strong connection to and affinity with the composers music.
Furthermore, Beethovens piano sonatas are as relevant today as they were two hundred years ago. James Brawn thinks of himself as a time traveller who strives to make the historical connection apparent to his listeners. In Vol.2, his personal comments about the stories behind the music appear in italics so that they are easily distinguishable from the musicological text that accompanies them. Subjective comments such as these provide a valuable, behind-the-scenes look at how artistic choices are made.
[Brawn] combines an easy spontaneity and symphonic gravitas in a way rarely encountered on disc since the balmy days of Daniel Barenboim's famous 1960s cycle for EMI. An outstanding Beethovenian: crystal-clear fingerwork, interpretive urgency, harmonically sensitive micro-pedaling, a natural instinct for symphonic structure, arresting yet never over-emphatic sforzandos, super-fast dynamic reflexes, the ability to find wonderment at the way Beethoven re-contextualizes the conventional to create something entirely new and original, and a freshness of spontaneity free of cluttering reverential rhetoric.  Julian Haylock, International Record Review, March 2015