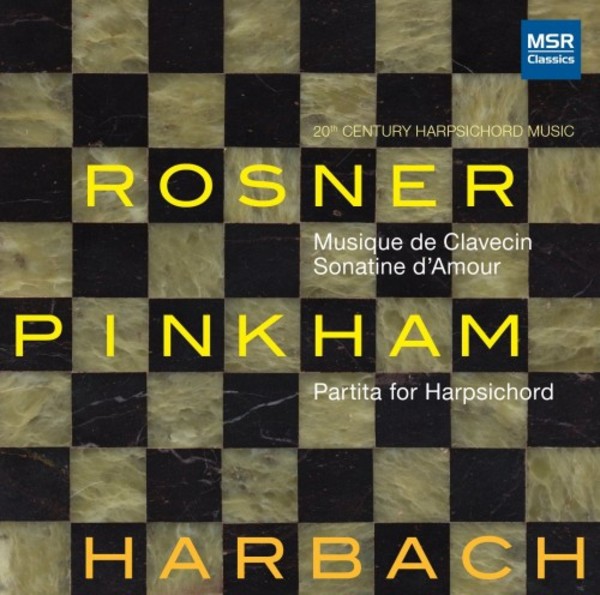 Arnold Rosner has composed more than 120 musical works over a 50-year period. The style has a certain unity, but the various works are diverse. Atonality and post avant-garde trends rarely enter the picture. However, the very recent ultra-conservative style one finds in music written by some composers since the year 2000 is equally absent. Minimalism makes rare decorative effects, but emotional and technical richness predominate through mixed modes, major-minor effects and sometimes cathartic cross-rhythm All this is part of a large, if misunderstood, community of middle-way compositional effort to which Daniel Pinkham and Barbara Harbachs own compositions may loosely also belong, each in its own individual articulation. One may observe the entirely coincidental fact that Rosner received his doctorate from State University of New at Buffalo in 1972, and Harbach taught as director of keyboard studies there in the 1980s. Recordings of Rosners music are numerous and well-received. He has taught at Kinsgsborough Community College of the City University of New York since 1983, during which period he achieved some notoriety in the field of tournament contract bridge. Within a strangely idiosyncratic personal style, cross-influences come and go  the polychoral, harmonically roaming grammar of Henrich Schütz here, the melodic/rhythmic spinning out of Indian music there.
Daniel Pinkham was born in Lynn, Massachusetts, and attended Harvard where he studied composition with Walter Piston and Aaron Copland. At Tanglewood, he studied with Arthur Honegger and Samuel Barber and subsequently with Nadia Boulanger. In addition to his work in composition, Pinkham was an active keyboard performer, particularly in the field of early music, having studied organ with E. Power Biggs and harpsichord with Wanda Landowska. He taught at Boston University, Harvard University, Dartington Hall in Great Britain, and at the New England Conservatory. In 1958, Pinkham was appointed Director of Music at Bostons historic Kings Chapel. He was the recipient of three honorary degrees: Litt D. from Nebraska Wesleyan University, Mus. D. from Adrian College and Mus. D. from Westminster Choir College. A prolific composer, Pinkhams catalog includes four symphonies and other works for large ensembles, cantatas and oratorios, concertos, theatre works and chamber operas, chamber music, electronic music and 20 documentary film scores. He received numerous awards and commissions and was a Fellow of the American Academy of Arts and Sciences.
Barbara Harbach has toured extensively as both concert organist and harpsichordist throughout the United States and Canada, and internationally in Bosnia, Croatia, Czech Republic, Germany,
Hungary, Japan, Korea, Romania, Serbia and Siberia. Harbachs lively performances and recordings have captured the imagination of many American composers, and the body of work written for and dedicated to her is substantial. She is involved in the research, editing, publication and recording of manuscripts of 18th century keyboard composers, as well as of historical and contemporary women composers. As an accomplished and prolific composer herself, Harbach has a large catalogue of works, including symphonies, operas and ballets; works for chamber and string ensemble; musicals and film scores; works for organ, harpsichord and piano; choral anthems; and arrangements for brass and organ of Baroque music. Harbach initiated Women in the Arts−St. Louis, which through more than 800 events by various cultural organizations provided audiences with new and historical examples of the achievements of women writers, composers and artists.
[Rosners] harpsichord writing shows a deep knowledge of the harpsichord literature. I enjoyed the textures he creates in the Noel movement. Rosners Sonatine DAmour (1987) is lovely Pinkhams Partita for Harpsichord (1964) is conceived on a grand scale... Pinkham was fond of counterpoint, and several movements offer his take on classic polyphonic techniques like canon and fugue. Other movements are lyrical. The Andante, with its syncopations and melancholy minor seconds, is almost bluesy. The second-to-last movement, a Scherzo and Trio, shows the harpsichord at its most sparkly. Pinkham wrote excellently for the harpsichordwhich he played. Harbach plays with great conviction. People interested in 20th century harpsichord music will be overjoyed to hear this superb release.  American Record Guide, May/June 2103