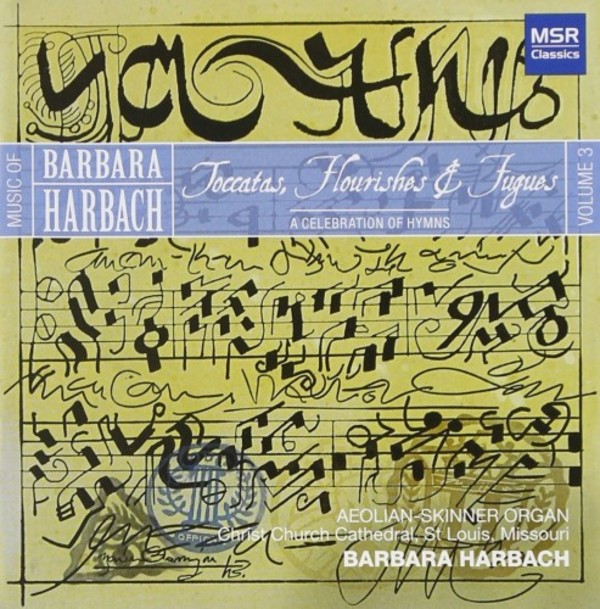 Performed on the Aeolian-Skinner organ, Christ Church Cathedral, St Louis, Missouri
American composer Barbara Harbach has a large catalogue of works, including symphonies, works for chamber ensemble, string orchestra, organ, harpsichord, musicals, choral anthems, film scores, modern ballets, and many arrangements for brass and organ of various Baroque works. She is also involved in the research, editing and publication of manuscripts of eighteenth-century keyboard composers as well as historical and contemporary women composers. Her works are available in both recorded and published form through labels including MSR Classics, Naxos, Gasparo Records, Kingdom Records, Albany Records and Northeastern Records, and publishers including Hester Park, Robert King, Elkan-Vogel, Augsburg Publishing, Agape Music and Vivace Press.
Harbach has toured extensively as both a concert organist and harpsichordist, and her lively performances and recordings have captured the imagination of many American composers. The body of work written for and dedicated to Harbach is substantial. Musical America has called her "nothing short of brilliant," and Gramophone has cited her as an "acknowledged interpreter  and, indeed, muse  of modern harpsichord music." She was host of the weekly television music series Palouse Performance seen throughout the Inland Northwest.
Currently professor of music at the University of Missouri-St. Louis, Harbach holds academic degrees from Pennsylvania State University (BA), Yale University (MMA), Musikhochschule (Konzertdiplom) in Frankfurt, Germany, and the Eastman School of Music (DMA). In 2002, she received an honorary doctorate in music, honoris causa, from Wilmington College, Ohio for her lifetime achievement as a composer, performer, editor and publisher. Harbach is also the editor of Women of Note Quarterly.
Barbara Harbach initiated Women in the Arts-St. Louis, a celebration of the achievements of women creators. The more than 850 events by various cultural organizations in the St. Louis region provided audiences with new and historical examples of the work of women writers, composers and artists. She was the 2006 recipient of the Arts Education Award from the Missouri Arts Council for her work Women in the Arts  St. Louis as well as the Yellow Rose Award from the Zonta International Club of St. Louis, 2006, Faculty Excellence Award, 2006 from the College of Fine Arts and Communication, University of Missouri-St. Louis and Hellenic Spirit Foundation Award-St. Louis in 2007.
"This is a very enjoyable organ recital, the tunes just familiar enough and the treatment just novel enough to sustain interest throughout. Splendid sound. - Fanfare, July / August 2009
"cast in a well-conceived and executed neoclassical style with a conservatively modern harmonic language, [these hymns and spirituals] are fresh, invigorating, and exuberant... Harbachs playing reflects the music itself: strong, vibrant, rhythmic, clear. The large Aeolian-Skinner suits the music well, providing plenty of color, brilliance, and clarity in a moderately dry acoustic... This recording will provide much pleasurable listening and be a welcome resource for those seeking appealing, high-quality, hymn-based literature.. - The American Organist, May 2011