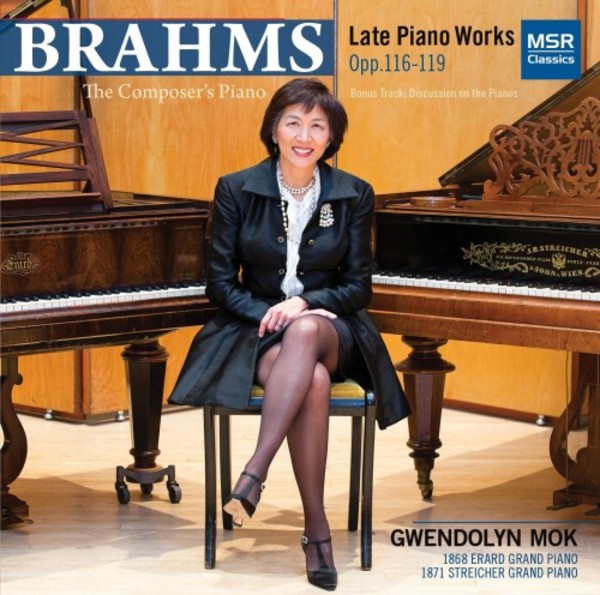 Performed on:
- 1868 Érard grand piano: opp.116 & 118
- 1871 Streicher grand piano: opp.117 & 119
Includes:
- comparative recordings of opp.116/2 and 119/3 on both pianos
- Brahms and His Pianos: a conversation between Gwendolyn Mok and David v.R. Bowles
Introspective, autobiographical, and both classically and romantically inflected in form and content, Brahmss piano music allies technique with authentic, wide-ranging musical expression, often formal and abstract. In terms of his musical designations, Brahms did not adhere to strict terminology with regards to form, as he expressed to his friend Elizabeth von Herzogenberg, who replied that I am always most partial to the non-committal word Klavierstücke, just because it is non-committal the clearly-defined form of pieces seems somewhat at variance with ones conception [of a rhapsody]. But it is practically a characteristic of these designations that they have lost their true characteristics through application, so that they can be used for this or that at will, without any qualms. Generally, the pieces entitled Capriccio involve a brief, energized mood (Stimmung) of extroverted vitality; Intermezzo invokes a mood of musing and reflection, as does the designation Romance. The Rhapsody connotes a large-scale work of some girth and force, albeit written in sonata-form, unlike the dashing fantasies of Franz Liszt. Fourteen of the twenty are titled Intermezzi: Brahmss friend the musicologist Philipp Spitta summed up the character of these works, and to some extent what he says characterizes all of the Brahms late piano pieces: I believe I understand what you wanted to say when you entitled them Intermezzos. Intermediate pieces are both preceded and followed by other things, and in this case musicians and listeners alike must imagine for themselves what they are.
Brahms may have conceived his late pieces with a particular instrument, the Streicher  with its light touch and delicate sound - in mind. Brahms had managed to secure an 1868 Streicher, a gift from the manufacturer made to him in 1872. Brahms claimed expertise in his ability to write for an instrument one knows through and through, as I know the piano. There I always know exactly what I write and why I write one way or another. At Clara Schumanns house, Brahms knew the French Érard and English Broadwood instruments, and he commented on the lightness and articulation of their respective action. That the Érard could coax out a warm, melodic tone [since] the nature of the instruments sound supports the melody speaks to the composers creative aesthetic. At the Ehrbar Salon, Vienna, he enjoyed their instruments and commented on the Schweighofer, a make that he would turn to in his late years, along with the Boesendorfer. At various venues in his concert career, Brahms played the Bechstein, a Steinweg Nachfolgern, and the American pianos, Steinway, and the Knabe. He favored what he termed the conservative pianos, especially those that could deliver distinctive voices and timbres in the treble, middle, and bass registers, which allow a change of timbre as the volume increases.
Born in New York City, pianist Gwendolyn Mok has appeared in many of the worlds leading concert halls, including the Barbican, Carnegie Hall, the Kennedy Center, Avery Fisher Hall, Alice Tully Hall, Davies Symphony Hall, and the Hong Kong Performing Arts Centre. She is also frequently invited to play and record with major international orchestras, most notably the London Symphony Orchestra, the Philharmonia, the Hong Kong Philharmonic Orchestra, the Beijing Philharmonic Orchestra and the Residency Orchestra of The Hague. In his 90th year, world renowned Ravel expert, pianist Vlado Perlemuter chose Gwendolyn Mok to be the last student to whom he would pass on his knowledge of Ravel. In 1994, the French Ministry of Culture awarded Mok a grant to study with Perlemuter for one year. Since 1995, she has been performing Ravels works in recital and was invited to teach the works at the London Royal College of Music, Welsh College of Music and Drama, the Dartington International Summer School in Devon, England, Shanghai Conservatory of Music and the San Francisco Conservatory of Music, among others.
In 1996, Mok made her official London debut in two concerts featuring music of Ravel in Somerset House, on a restored 1868 Érard grand piano in the Great Room of the Courtauld Galleries. Citibank UK sponsored Moks production, Ravel and the Post Impressionists and two additional productions in 1997 and 1998: Mendelssohn in London, Letters Home in the Raphael Gallery of the Victoria and Albert Museum, and A Gershwin Showcase, a re-creation of a 1930s radio showcase featuring a 27-piece jazz band and soloists, in the sumptuous deco-period ballroom of Londons Mayfair Hotel.
[In 2002] MSR released a marvelous Ravel cycle with Mok, recorded on an 1875 Erard grand piano. Twelve years later, the pianist gives us Brahms late pieces played on two well-preserved and markedly different period pianos... As Mok points out in an illuminating conversation and demonstration at the end of Disc 2 about Brahms and his pianos, the 1868 Erard used in the Op. 116 and Op. 118 pieces benefits from the instruments cross-strung soundboard and double escapement (the mechanism that allows the hammer to strike the string and only slightly fall back, enabling one to play repeated notes with ease). By contrast, the 1871 Streicher grands mellower sonority and slightly musty-sounding bass lends itself to the more consistently lyrical and sustained Op. 117 and Op. 119 selections. I suspect that the nature of these very instruments inspires Mok as much as the music itself... Its interesting how the best period performances use old instruments to make familiar works sound fresh, and Gwendolyn Moks thoughtful, heartfelt late Brahms interpretations do that beautifully.  Jed Distler, Classics Today, July 2014