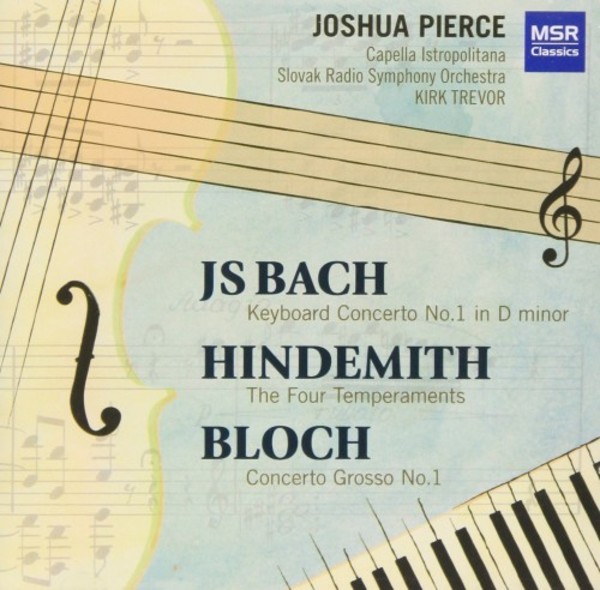 Keyboards were used with strings from a very early period in European music but their original function was to supply the so-called continuo part, a kind of rhythmic, harmonic underpinning to the baroque orchestra. Early instrumental music for strings took on the name concerto or concerto grosso. The two first violins and first cello were known collectively as the little concerto or concertino and the rest of the orchestra was known as the ripieno or, later, the tutti. If there was a soloist, it was usually the first violin although concertos for other solo instruments became popular in certain times and places (see the immense concerto output of Vivaldi). But the violin was always the solo instrument par excellence while the harpsichord long remained hidden behind the strings as a faithful accompanist.
Joshua Pierce is considered one of the most uniquely gifted virtuosos of our time. His on-going series of recordings on MSR Classics of works from the great composers of Mozart, Beethoven and Schubert to the romantic world of Brahms, Liszt and Tchaikovsky, form a testimony to the range of an artist who is also known for his performances of 20th century repertoire - from Gershwin to Cage and beyond. Such a range - encompassing the standard repertoire, contemporary works and re- discovered masterpieces of the past - is rare among the pianists of our day.
"What an interesting idea for pianist Joshua Pierce and conductor Kirk Trevor to bring together three of the most popular and substantial works for piano and string orchestra...The slow movement of the Bach D minor stands out for the alluring colorations with which the soloist and strings project the music's harmonic tension... Pierce is fluid and energetic...the fugal finale [of the Bloch] builds with apt exuberance." - Jed Distler, Gramophone, March 2014