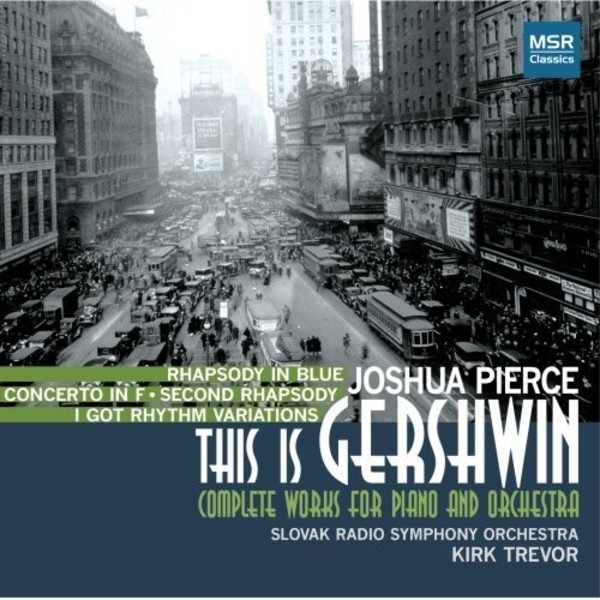 This is Gershwin: Complete Works for Piano & Orchestra

Joshua Pierces relation to George Gershwin has family roots. His father, director/choreographer Johnny Pierce, was largely responsible for his becoming a musician and for introducing him to the music of Gershwin at a very early age. The elder Pierce had worked with Gershwin in the 1930s, first meeting him when he was hired as a dancer in the original Strike Up the Band of 1929. In 1937, producer Dwight Deere Wilman asked Pierce to work on the Rodgers and Hart musical Babes in Arms. The choreographer of record was George Balanchine from the world of ballet but, as was often the case in those days, much of the actual work on the ground was done by others. Among other things, Pierce was largely responsible for the creation of the show-stopping Johnny One-Note number. Gershwin, who was aware of this, recommended him to work on the Goldwyn Follies film of 1939 which turned out to be Gershwins last show. Again, Balanchine was the choregrapher of record; however his credit was an odd one; he was listed under Other Crew as Ballet Conceiver and Stager, a credit that preserved Balanchines contractual credit and good name (while virtually conceding that the actual work was done by others).
In  preparing this recording of Gershwins Concerto, I spent much time investigating and working from the facsimile edition conductors score. Drawing upon material I felt to be of vital importance and relevance with regard to the Charleston idiom heard throughout, I have endeavored to provide further insight into several musical options Gershwin himself chose for his world premiere performance in1926. Other material exists as well, notably the reprise of the main theme in the solo piano part set against the orchestra in octaves in the first and last movements. It is my wish that future pianists will have a chance to investigate the material contained in the facsimile edition. This particular recording of the Concerto is not intended to be a definitive version, but rather an historical document; a further reexamination  a more thorough and enthusiastic look at the rich, brilliant and important musical material that was performed by George Gershwin before the omissions of the current Campbell Watson version took hold with performers.  Joshua Pierce