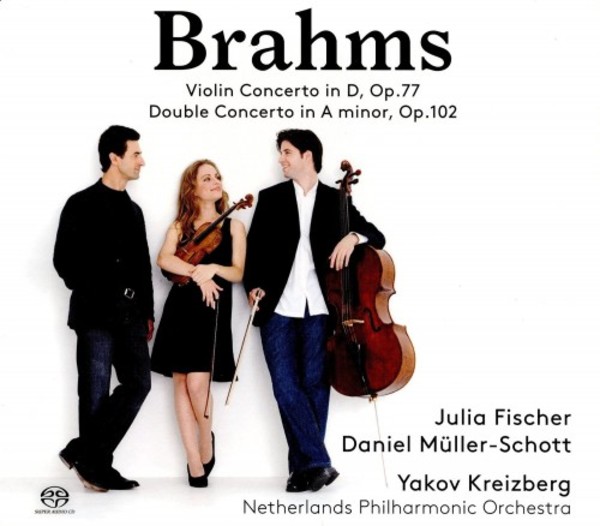 It is impossible to perform either Brahmss Violin Concerto in D major or his Double Concerto in A minor without inviting comparison to Joseph Joachim, the great Hungarian virtuoso for whom Brahms composed nearly all of his violin works. For many years, Joachim and Brahms were inseparable companions and mutual sources of inspiration. It was on Joachims urging that Brahms composed his Violin Concerto in D major, a masterpiece which quickly entered the standard violin repertoire.

The Violin Concerto was notable at the time for its return to a style of symphonic concerto which could be traced directly to Ludwig van Beethoven. This gives both conductor and orchestra a great deal of leeway for interpretation, especially during the long periods in which the solo violin doesnt play at all, such as the orchestral introduction and the beginning of the Adagio movement. Russian-born American conductor Yakov Kreizberg is more than up to the task of bringing these moments to life, as is the Netherlands Philharmonic Orchestra, for whom Kreizberg had served as chief conductor since 2003.

The titular role of violin soloist is filled masterfully by German violinist Julia Fischer, who throughout her numerous Pentatone releases consistently brings a maturity and poise well beyond her years. Her interpretation captures both the lightheartedness and joy with which Brahms composed these works and the seriousness of the tradition from which they come. Fischers ability to graciously cede the spotlight to the orchestra and emerge in the foreground at just the right moments lends this particular release a level of interaction which truly sets it apart.

For the Double Concerto in A minor, Fischer is joined by fellow Munich native Daniel Müller-Schott on cello. Brahms composed this work as an olive branch to Joachim after a period in which they refused to speak for several years following Joachims contentious divorce. The Double Concerto is rife with musical cues and other references to their friendship, particularly in the interplay between cello and violin, and this spirit is perfectly captured by an exceptionally dynamic performance by Fischer and Müller-Schott.