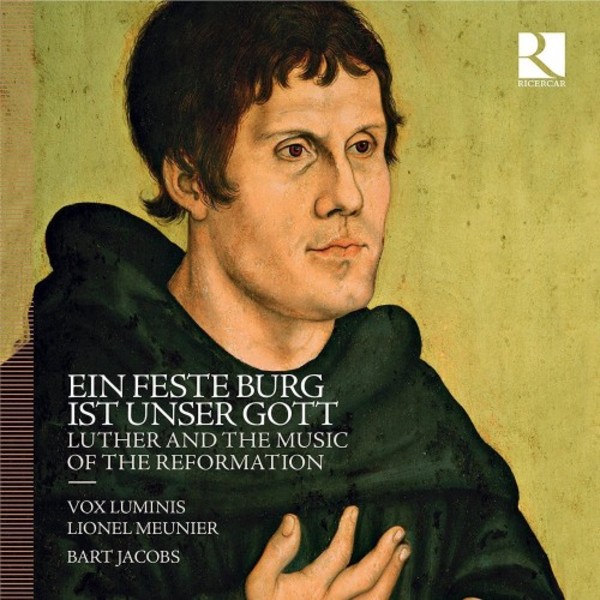 Ein feste Burg ist unser Gott: Luther and the Music of the Reformation

A two-CD set devoted to the Lutheran liturgical repertory from Martin Luther himself to Heinrich Schütz.

The first disc comprises compositions specific to the Lutheran liturgy: Deutsche Messe, Deutsches Magnificat, Deutsche Passion (the first German polyphonic Passion, by Joachim von Burck) and even a reconstruction of a Deutsches Requiem drawn from polyphonic works that set the same texts as those Brahms was later to use for his Deutsches Requiem.

In short, this is a winner all round, and deserves to be taken up by historians and music lovers alike. (Recording of the Month)
MusicWeb International June 2017

We are guided through the seasons of the church year and the foundations of the Lutheran liturgy in the company of composers, from Luther himself, Schein, Scheidt and Praetorius to the little-known Steffens and Joachim a Burck. Nothing surpasses the solemn beauty of Schützs German Magnificat, but Thomas Selles Die mit Tränen säen (later set by Brahms) is piercingly beautiful. Intensely focused singing from Vox Luminis, and fine organ interludes by Bart Jacobs.  Nicholas Kenyon
The Observer 12 March 2017

... it traces a fascinating history in sound traversing the first century and a half of Lutheranism, colonising two generously-filled discs housed in a lavishly illustrated book format. ... Lionel Meuniers assured direction never misses (nor overstates) and expressive trick; and Vox Luminiss warmly inflected singing is throughout finely-attuned to the way in which every note has its exact place in sustaining the whole. A superb anthology, superbly executed.  Paul Riley (Choral & Song Choice)
BBC Music Magazine July

This year has seen several fine recordings celebrating the quincentenary of the founding act of the Reformation but this is comfortably the most searching and artistically rewarding that Ive listened to. ... Vox Luminis (here with organist Bart Jacobs) give themselves plenty a scope with the double-CD format, and fill both discs generously. Programmatic flair is backed up by performances and a sound recording to match.  Fabrice Fitch
Gramophone October 2017