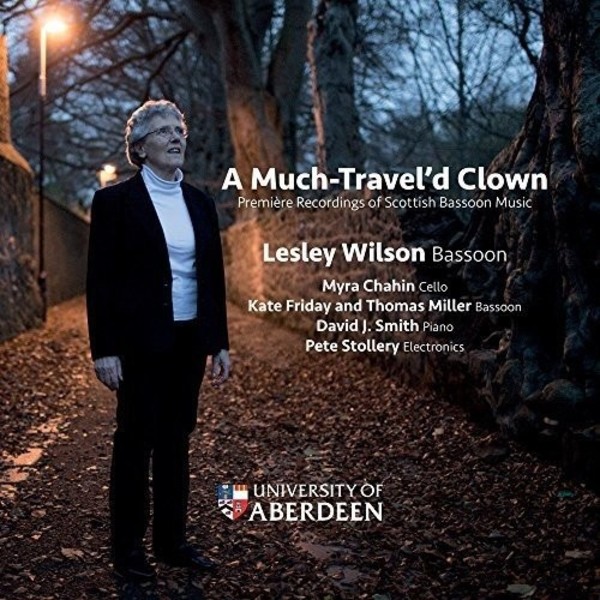 Lorenzo, the much-travelled clown, is a Venetian glass ornament belonging to the composer, Marcus Blunt. Lorenzo inspired both Blunt's work for bassoon and piano, at the heart of this disc, and a drawing by Frank Bayford, which emerged as a natural focus for a growing collection of chamber works for bassoon. The music of The Much-Travel'd Clown captures the mercurial character of the bassoon: an outwardly cheerful clown who sometimes expresses an inner sadness.

Each of the seven composers featured on this recording makes an individual response to the technical and expressive resources of the bassoon. The bassoon is a wonderfully versatile instrument, with three distinct registers across a range of nearly four octaves, yet has too often been overlooked by composers - something Lesley Wilson has sought to rectify by commissioning new works for the instrument.

Alongside established works by Hans Gàl and David Johnson, the CD features several pieces by living composers, all of whom explore different facets of the bassoon's character. As well as works for solo bassoon, the instrument is heard in combination with piano and in duet with the cello, in music ranging from the firmly diatonic to the luminously atonal, via the jazz-infused bagatelles of Michael Norris.

Lesley Wilson was principal bassoon with the Scottish National Orchestra (later, Royal Scottish National Orchestra) for 26 years, before embarking on a freelance career. She has taught for the Royal Conservatoire of Scotland (formerly, the Royal Scottish Academy of Music and Drama), the Royal Northern College of Music, and is Visiting Tutor in bassoon at the University of Aberdeen. Although appearing on numerous orchestral recordings, this is Lesley's first CD of solo and chamber works, and it reflects a lifetime's interest in commissioning new music.