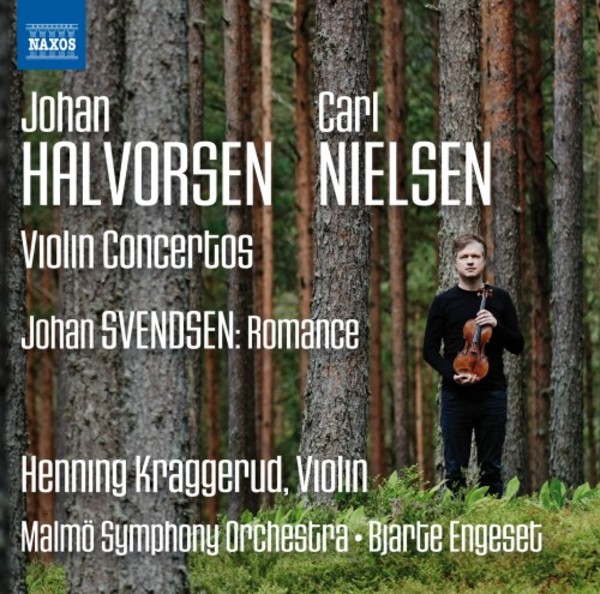 Romance for violin and strings, op.26

Romance for violin and strings, op.26

In his day, Johan Halvorsen was one of Norways most talented violinists and an internationally renowned conductor and composer. With its beautifully lyrical themes and Norwegian character including Hardanger fiddle effects, his Violin Concerto was described by contemporary critics as an outstanding work and performed to great acclaim in 1909. It was considered lost, only to be rediscovered in 2015 in the archive of its original soloist. With its equally confident opening and symphonic proportions, Nielsens Violin Concerto combines emotive power with a delightfully pastoral character, while Johan Svendsens spontaneously inventive and melodic Romance has become one of his best-loved works.

An artist of exquisite musicianship, Henning Kraggerud is invited time and again to join many of the worlds most prestigious orchestras, including the Philharmonia, Hallé, Danish National Symphony, the Cincinnati, Baltimore, Toronto and Vancouver symphony orchestras and the Hong Kong Philharmonic. He has performed with the LA Philharmonic at the Hollywood Bowl and twice at the BBC Proms in London. In his native Norway, he is Artistic Director of Arctic Philharmonic Chamber Orchestra. He is a Professor at the Barratt Due Institute of Music in Oslo, and since September 2015 has been International Chair in Violin at the Royal Northern College of Music in Manchester.

Bjarte Engeset is one of Norways leading conductors, with acclaimed recordings for Naxos including works by Svendsen, Tveitt, Grieg, Sibelius and Sinding. His recordings of Griegs complete orchestral music with the Malmö Symphony Orchestra were described by ClassicsToday.com as being as fine as any in the catalogue (Vol.4, 8570236).

Now heres an important release: the first commercial recording of Johan Halvorsens Violin Concerto, rediscovered as recently as 2015 after many years gathering dust in the archive of its original soloist. And its quite a find. Halvorsen  a Norwegian contemporary of Nielsen  spent the major part of his career as a conductor and composer of theatre music, but in his youth he was a very accomplished violinist. However, used as he was to composing in smaller forms, the initial work on his Violin Concerto  begun in early 1907  stalled until, in January 1908, Halvorsen heard the playing of Canadian violinist Kathleen Parlow, which gave him the impetus to complete the work. The work was premiered by Parlow in August 1909, and she gave three further performances, with critics hailing it as an outstanding work, even if the opening movement was formally a little unclear. But plans for further performances in the United States never materialised, and the work lay neglected after 1910, until by chance it was unearthed in an archive in 2015.

It was Henning Kraggerud who gave the Concerto its second premiere, in Norway in July 2016, and the following month he made the present recording in Malmö. He has previously impressed in concertos by Mozart, Sibelius and Sinding, all on Naxos, and this latest disc is another feather in his cap. With his confident, strong, nimble but unshowy style of playing he proves the ideal soloist, easily commanding centre stage without ever overshadowing the orchestra. The Concerto itself is excellent second drawer material  think Dvořák with a Scandinavian twist  weighty Nordic orchestral chords launching the work, with opening cadenzas from the violin, before swinging, Bruch-like, into an engaging and frequently dramatic main section in faster time. More reflective secondary material gives a foretaste of the beautifully inward central Andante, which has all the features necessary for an instant favourite of the most soulful kind. Formal cogency is gained by way of a motto theme which links the first and second movements, while the finale breaks ranks in a spirited, folk-inspired dance (specifically, the Norwegian halling): there are technical challenges aplenty here: octave passages, double-stops, and helter-skelter runs, all of which Kraggerud negotiates with aplomb. And he receives sterling support throughout from the alert players of the Malmö Symphony Orchestra under Bjarte Engeset. The performance as a whole is hugely successful and enjoyable, and the Concerto deserves to be taken up by violinists everywhere as a happy new addition to the repertoire.

The qualities enumerated above also help to make the main coupling, the Nielsen Concerto, a highly competitive one in the current catalogue. Once again its the unforced naturalness of Kraggeruds playing that makes the performance so compelling, coupled with especially characterful wind playing from the Malmö players. The noble theme in the first movements introductory Largo is particularly affecting, and once again the many technical challenges are handled deftly, not least in the lengthy first movement cadenza. The Poco adagio that precedes the second movement proper, has genuine feeling, and the Rondo itself has just the right amount of élan in the robust exchanges between soloist and orchestra. As a budget version of a popular work, this is attractive indeed.

The icing on the cake is a gorgeously tender performance of Johan Svendsens popular Romance, and its a very appropriate inclusion: among its early performers was Johan Halvorsen, who played it in Bergen in 1898, with the Amsterdam Concertgebouw Orchestra conducted by Svendsen himself. Its a neat link that round off an exceptional disc. Recording and documentation are first class: treble akevitten all round!