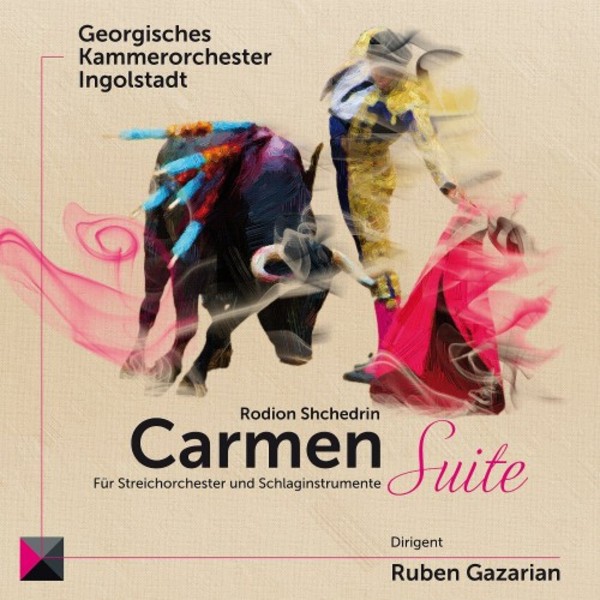 The Georgian Chamber Orchestra of Ingolstadt and their principal conductor Ruben Gazarian present their third new CD recording: Rodion Shchedrins Carmen Suite is a tribute to the great Russian prima ballerina and choreographer Maya Plisetskaya (*1925), who died in May 2015 in Munich, her chosen and adopted home. The recording will also honour her husband, the composer Rodion Shchedrin, who will celebrate his 85th birthday in 2017. This CD production is a live recording of a concert which took place on 15 October 2015 in Ingolstadt.
Rodion Shchedrin composed the Carmen Suite in the mid-1960s for his wife. The composition for strings and percussion is music taken from a ballet based on motives from Georges Bizets opera Carmen. Familiar melodies from the opera Carmen are stylistically transformed by the use of colourful instrumentation which creates a markedly different atmosphere, as well as by the use of sharpened rhythms. Furthermore, the Carmen Suite also reflects upon motives from the second LArlésienne Suite. The premiere of the Carmen Suite on 20 April 1967 at the Bolshoi Theatre in Moscow caused an enormous scandal: Shchedrins Carmen, portrayed by Plisetskaya in a highly erotic manner, was too suggestive for the prudish Soviet society of the time, in addition to being too freedom-loving. In spite of this Plisetskaya was to personify Shchedrins Carmen in approximately 350 performances, for the last time in 1990 at the age of 65. For Shchedrin, his Carmen Suite became an outstanding success at an international level, and up until the present day it remains the most popular, well-known, and most frequently performed work of the composer who was valued and supported by Dmitri Shostakovich. Mats Ek has also referred to Shchedrins Carmen Suite for his 1992 reworking of Carmen in Stockholm.
The Georgian Chamber Orchestra Ingolstadt was founded in Tbilisi, Georgia in 1964 as the Georgian State Chamber Orchestra, and celebrated its fiftieth anniversary in 2014. In 1990 the orchestra moved to Ingolstadt, where it has made its second home for the last twenty-five years. Even today the orchestra consists almost entirely of musicians from Georgia, the former Soviet Union, and Eastern Europe. In 2015 Ruben Gazarian took over the position of principal conducotr of the orchestra, in addition to his position with the renowned Württemberg Chamber Orchestra Heilbronn, where he has been Artistic Director since 2002.