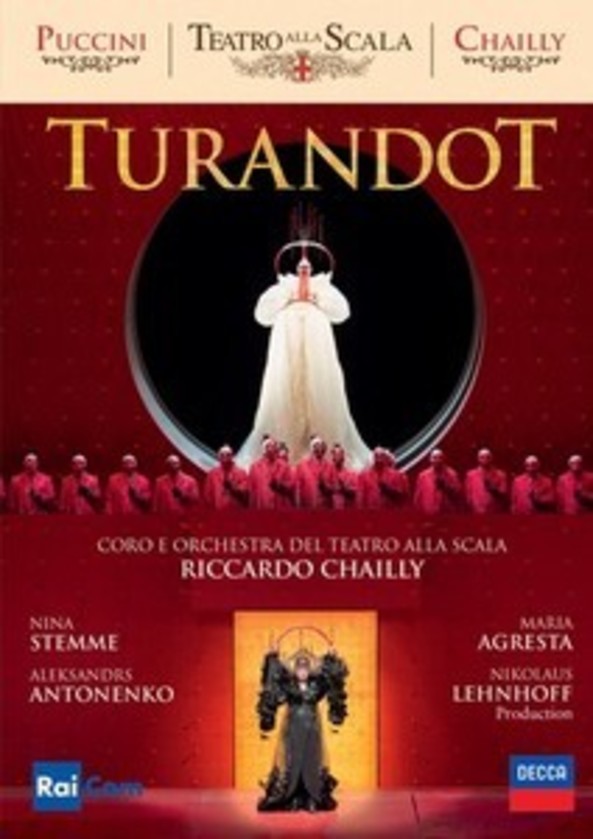 Turandot, the first Blu-ray/DVD of a cycle of the complete Puccini operas in partnership with La Scala and conducted by Chailly. Quality casts and sumptuous productions guarantee a new benchmark for these classic operas. This Turandot is unique in presenting for the first time on film the Luciano Berio completion of the opera - premiered by Chailly in 2001. Nina Stemme assumes the title role with Maria Agresta as Liu and Aleksandrs Antonenko as the heroic Calaf.

There are many more riddles in Nikolaus Lehnhoffs production of Puccinis final opera than are asked of Calaf. But it is a measure of Lehnhoffs authority that you never question his choices  the blood red geometrical set, studded with coat pegs it seems, the people of Peking in uniform black and wearing half masks and then in brilliant red, and Ping, Pang and Pong refugees from some extravagant commedia dellarte troupe. We are [in] no doubt that we are watching a fable, but its a horror story too with death at every turn. ... Love really does triumph at La Scala. In part its because Riccardo Chailly digs deep into Puccinis score... And the La Scala orchestra plays as if their life depended on it. ... Nina Stemme is in the great tradition of Birgit Nilssons Turandot, though there is a touching uncertainty around her Princess too... Maria Agrestas Liù is one of the most appealing on record.  Christopher Cook (Opera Choice)
BBC Music Magazine June 2017

The set and costumes (Raimund Bauer and Andrea Schmidt-Futterer) are a feast for the eye. There is an enormous studded wall with an entrance and a balcony; in the wall, towering over the balcony, is a circular space in which the princess (and, later, her father Altoum) first appears. The costumes include a fearsome black creation for Turandot, festooned with layers of material resembling seaweed, and striped pantaloons for the masks Ping, Pang and Pong. Then there is Duane Schulers lighting, which turns the set blood-red at appropriate moments. ...

On her first, silent appearance, Turandot is so plastered in red and white make-up that its hard to see why Calaf is bowled over. Never mind: Nina Stemme is quite wonderful once she starts to sing. Clutching her red staff, she delivers In questa reggia with burnished tone, culminating in a gleaming top C when Calaf joins her in the threefold Gli enigmi sono tre.  Richard Lawrence
Gramophone April 2017