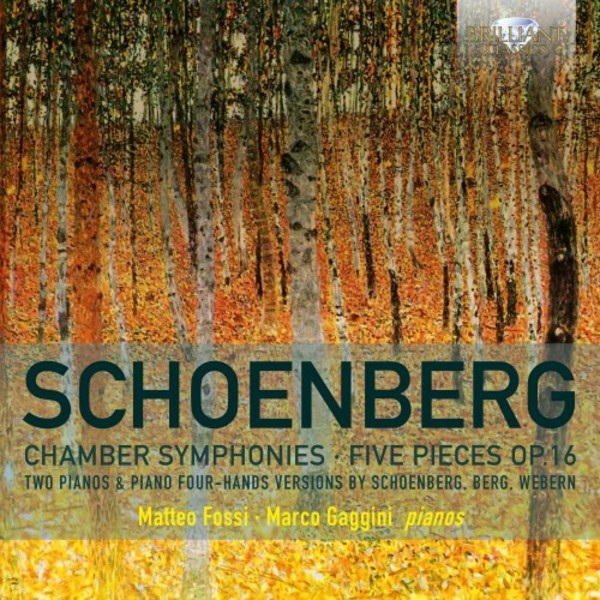 Although both the Op.9 Chamber Symphony and Five Orchestral Pieces Op.16 broke new ground not only in Schoenbergs own output but the fast‐developing history of orchestral music around the turn of the 20th century, piano duet arrangements of such works were still regarded as obligatory, as they had been for Brahms. Often such transcription work, aimed at a domestic audience, was left to jobbing professionals employed by the publishers, but both Brahms and Schoenberg often made these arrangements for themselves: not least so that friends (in the case of Brahms) and pupils could study and profit from them.

Indeed the First Chamber Symphony has been dressed both up and down, over the years, by the composer and others, according to requirement and circumstance, from a piano trio version to a full orchestral clothing. At its heart, however, remains a remarkable distillation of symphonic procedure, packed with melody and bursting with energy. Schoenberg initially worked on a piano‐duet version but became dissatisfied and turned it over to his everwilling pupil, Alban Berg.

This isnt a work like any other, was Bergs prophetic remark. Its a milestone in music, sufficient for an entire generation. His intent was to write an arrangement that could actually be played on the piano, rather than a version that simply aimed at facilitating study and analysis. Matteo Fossi and Marco Gaggini here present its first recording: an essential acquisition for anyone with more than a passing interest in one of the titans of Western art music.

The symphony is complemented by a no less rare and fascinating transcription of the utterly un-symphonic Orchestral Pieces Op.16, by Schoenbergs other pupil of genius, Anton von Webern. The pieces make original and inventive use of the fullest orchestral canvas in every bar, so much so that a transcription which preserved their essential qualities would seem an impossible task. Yet Webern found a compelling solution that avoided superficial effects and focused instead on making the chord clusters express sound in almost skeletal terms that prefigure those of the sixth piece of Schoenbergs Op.19. In this way the colour of the chords rises to the surface.

Finally, the composer made his own arrangement of the Second Chamber Symphony, which revisits the genre of the First but in a more expansive and Romantic idiom, thus presenting fewer challenges to the transcriber.