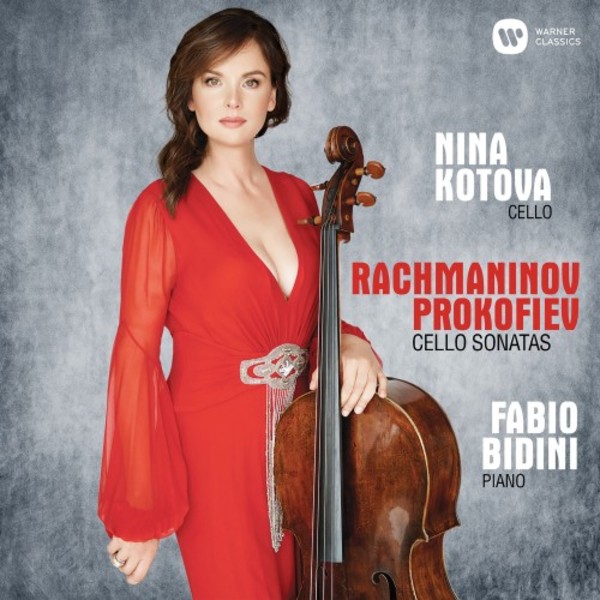 The Russian-born cellist Nina Kotova established a base in the USA early in her career, but this second recording for Warner Classics comprises works that exemplify the musical soul of her native land: Rachmaninovs Sonata for Cello and Piano in G minor, which dates from 1901, and Prokofievs Sonata for Cello and Piano in C major, composed almost half a century later.

The Rachmaninov sonata is a rich, grandly scaled work that makes substantial demands on the performers, not least in terms of expressive virtuosity. The Prokofiev is brightly optimistic in spirit, taking the listener on an epic journey leavened with ironic humour and lyricism; it was given its premiere in 1950 by the formidable duo of Mstislav Rostropovich and Sviatoslav Richter. Both these important works have been in Nina Kotovas performing repertoire for many years, but she has waited until now to commit her interpretations to disc.  They are complemented here by two smaller pieces by Tchaikovsky, who exercised an important influence on both Rachmaninov and Prokofiev: arrangements for cello and piano (by Alexander Vlasov) of numbers originally conceived for solo piano, the Romance (op.51) and Meditation (op.72).

Kotova has been praised by Gramophone as a strong and individual artist [whose] depth of feeling and technical control are never in doubt, and who is notable for a flexible expressive style, beautiful tone throughout the cello's range, and an impressively dextrous, confident manner of delivery. Newsweek has described her as a fantastically gifted cellist, Time as a musician of high seriousness and real talent and the Los Angeles Times as a talent to reckon with: poised, committed, graceful and spirited.

Nina Kotovas father was Ivan Kotov, a celebrated player of the double bass and a committed proponent of contemporary music in the Soviet Union. As a performer, Kotova is likewise an advocate of new music, and as a composer has herself produced a number of substantial works, including a cello concerto.

For this recording her partner is the Italian-born pianist Fabio Bidini, whose connection with the United States dates back to 1993, when he was a finalist in the Van Cliburn Competition. In addition to commanding a repertoire of more than 80 concertos, he is an eminent chamber musician and teacher.

The foundations of Nina Kotovas career were set when, at the age of just seven, she became a student in the adult class at the Moscow Conservatory and went on to win First Prize at the Prague International Competition at the age of 15. She also studied in Cologne and at Yale.  1996 marked her London debut at Wigmore Hall and she has since performed at such venues as the Barbican Centre, Carnegie Hall, the Great Hall of the Moscow Conservatory, the Amsterdam Concertgebouw, the Forbidden City Concert Hall in Beijing, Osaka Symphony Hall in Japan, and even in Moscows famous Red Square. As a soloist she has played with orchestras around the world and at major festivals such as Verbier, Las Canarias and Tuscan Sun, of which she is co-founder and Artistic Director. Artists with whom she has collaborated include Lang Lang, Nikolaj Znaider, Hélène Grimaud, Joshua Bell, Sarah Chang, Bobby McFerrin, Ivry Gitlis, Antonio Pappano and the actor Jeremy Irons. The cello she plays is a 1673 Stradivarius that was previously in the possession of Jacqueline du Pré and then of Lynn Harrell.