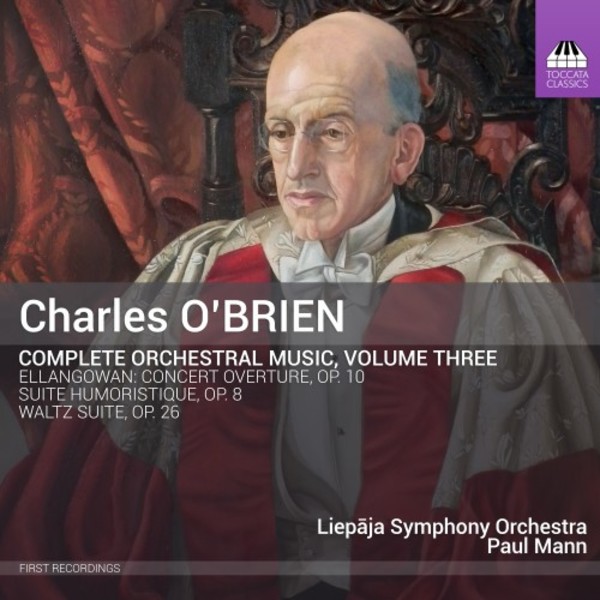 The rediscovery of the music of the Edinburgh composer Charles OBrien (1882 1968) continues with this third and final CD of his orchestral music (with chamber music next in the pipeline).
The explicitly Scottish Ellangowan Overture contrasts splendid Caledonian vistas with some wonderfully catchy tunes, in a manner reminiscent of the well-known overture Land of the Mountain and the Flood, by Hamish McCunn  OBriens teacher.
The two suites show OBrien skilfully combining a naturally symphonic voice with an unexpected sense of fun  imagine the Rosenkavalier waltzes in an Edinburgh ballroom!
The first two releases in this series were very well received. The reviewers for MusicWeb International described Volume One (TOCC 0262) as beautifully played and paced, and finely recorded as well and wrote of Volume Two (TOCC 0263): The booklet notes by Paul Mann are fascinating. His essay-length discussion of these works requires to be read. [...] The Latvian orchestra plays with enthusiasm and seem to have a definite flair for evoking the mists and sceneries of Scotland.
Paul Mann is a regular guest-conductor with many orchestras throughout Europe, the USA, Australia and the Far East. He is well known for his collaboration with the legendary rock group Deep Purple; among his more recent recordings is the first-ever studio account of Jon Lords Concerto for Group and Orchestra. This is his fifth recording for Toccata Classics: the others have featured the music of Leif Solberg (TOCC 0260), Charles OBrien (TOCC0262 and 0263) and the first volume in a remarkable series of new works for string orchestra, Music For My Love (TOCC0333), featuring music written in memory of Yodit Tekle, the partner of Martin Anderson of Toccata Classics. Paul Manns further recordings of the complete orchestral music of Henry Cotter Nixon (18421907), also with the Kodály Philharmonic Orchestra, are in preparation (TOCC0372, 0373 and 0374).