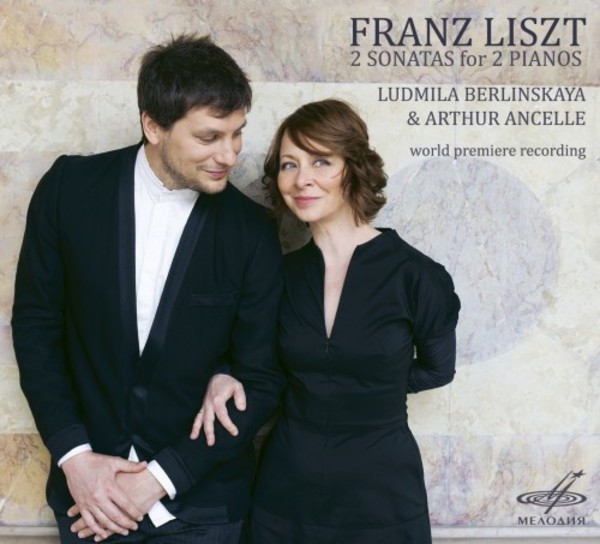 Melodiya presents a recording of two-piano transcriptions by Franz Liszt and Camille Saint-Saëns performed by the piano duet of Ludmila Berlinskaya and Arthur Ancelle.

The unity of beautiful souls, wrote foreign reviewers about the duet. Representatives of famous artistic dynasties (Berlinskaya is a daughter of Valentin Berlinsky, an outstanding cellist, professor and founding member of the Borodin Quartet; Ancelle is a great grandson of the legendary opera diva Fanny Heldy, a grandson of a ballerina and a son of a theatre director) and alumni of different music performing traditions, they began to jointly perform in 2011 and have won the listeners hearts in Russia, France and Switzerland. Their joint debut album with Tchaikovskys music was highly acclaimed by BBC Music Magazine.

The programme of this album combines two, at first glance, completely different pianistic styles of the 19th century  Liszt and Saint-Saëns. However, the two great musicians took a genuine interest in each others works that was expressed in mutual transcriptions. Liszt unintentionally introduced the powerful current of his personality into his arrangements. The Dance of Death is an obvious example that makes the comparison between the two piano versions of this symphonic work, one transcribed by Liszt and the other transcribed by the author, even more interesting. On the other way around, a hint of Saint-Saëns is heard in his transcription of Liszts B minor Sonata he made for himself and his friend and outstanding French pianist Louis Diémer. The album also includes Liszts Après une Lecture de Dante: Fantasia quasi Sonata arranged for two pianos by Arthur Ancelle.

This is one of the finest two-piano recitals to come my way for quite some time  though I may be slightly biased as it has the world premiere of a work I have been waiting to hear ever since I first learnt of its existence over 30 years ago. ... Liszt himself always intended to make a two-piano version but never got around to it. Saint-Saëns undertook this labour of love between August and November 1914. ... I can only say I was bowled over by the playing of this Franco-Russian husband-and-wife duo, astonished to the extent that any initial scepticism, any notion of this being a mere curiosity, is utterly confounded.  Jeremy Nicholas
Gramophone March 2017