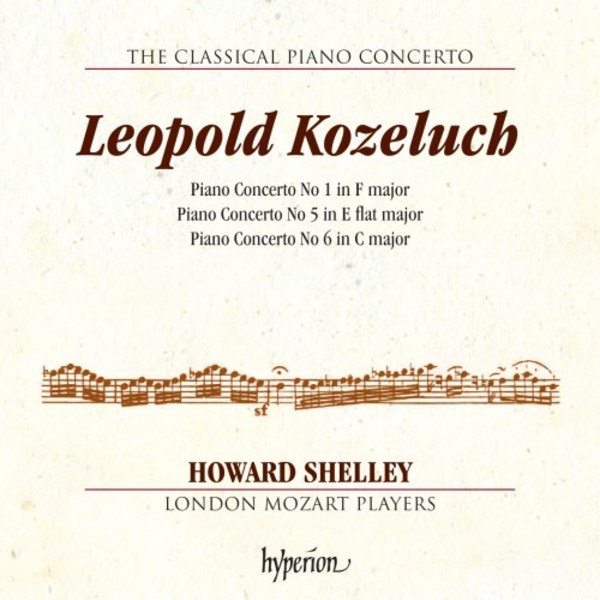 Leopold Kozeluch  another composer-pianist trying to make his way in 1780s Vienna  has not been treated kindly by posterity, suffering that posthumous obscurity shared by so many of Mozarts contemporaries. But his brand of Rococo galanterie, much in evidence in these three piano concertos, is guaranteed to delight, especially in such affectionately attentive performances as these.

Leopold who? The latest instalment in Hyperions Classical Piano Concerto series focuses on a lesser known Bohemian composer, born in Velvary in 1747 as Jan Antonín Koeluh. His musical gifts were soon apparent under the tutelage of his namesake older cousin in Prague, and early successes in ballet and pantomimes persuaded him to abandon legal studies to concentrate on full-time composition. By 1778, when he moved to Vienna, he had already changed his name to Leopold Kozeluch to avoid confusion with his cousin, and it was in the Habsburg capital that his career really flourished as a pianist-composer. Such was his growing confidence that he turned down the offer of Mozarts old job at the Salzburg archiepiscopal court in 1781. In 1792 he was appointed composer and Kapellmeister to the imperial court, and from 1804 he set numerous Scottish Irish and Welsh folksongs for the Edinburgh publisher George Thomson. He was also leading publisher, of others music as well as his own.

By the early 19th century Kozeluchs star was on the wane, but although his music has none of dramatic genius of Mozart, none of Haydns astonishingly inventive way with motifs, none of Beethovens sheer boldness, at its best it combines Rococo grace, classical ease and even hints of early Romanticism à la Schubert and Weber. A significant part of his instrumental output comes in the shape of 22 keyboard concertos, the majority composed for the pianoforte rather than the harpsichord. They have an easy charm and, despite their modest scoring, the orchestra for the most part acting as accompanist rather than engaging in dialogue with the soloist, are all entertaining, helping to explain why, in the 1780s and 90s, Kozeluch was one of Viennas most popular composers, his praises sung by Charles Burney among others. The three works on this new disc all date from the 1780s, and are thoroughly engaging. Shades of the hunt colour the first and fifth concertos, while the sixth has a martial element to its first movement. Highlights are the opening movement of the F major work, the variation second movement of the E flat major (which segues neatly into the finale), and the lovely sonata-form Andante of the C major, leading to a menuet-style rondo.

Howard Shelley is as persuasive a soloist as one could wish for, bringing a limpid delicacy to the slow movements and a tempered brilliance to the outer movements that makes the most of their fantasia-like developments while never pushing the bounds of classical propriety too far. Ornamentation is discreet and stylish, as are the accompaniments, the London Mozart Players in their element, with the orchestral tuttis always pert and finely shaded. With music that often recalls Mozarts early works in the genre, these concertos are not only well worth exploring but help to round out our picture of the Viennese piano concerto at an important time in its development. Kozeluch may, in the final analysis, not have been much of an innovator, but he was certainly a significant figure among Czech composers of the classical era, and this is a very welcome addition to the discography and to Hyperions enterprising series. Detailed notes by Richard Wigmore, fine recording and attractive presentation all add up to a tempting New Years treat.