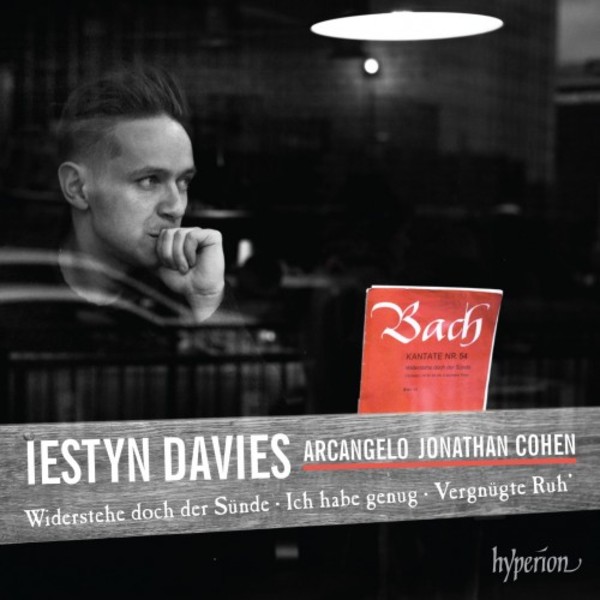 Ich habe genug is a timeless, transcendental masterpiece: a profound expression of Christian faith at the very end of life. It demands artistry of a special order, and Iestyn Davies now joins the likes of Dietrich Fischer-Dieskau and Lorraine Hunt Lieberson in the works distinguished discography. The couplings are equally ravishing performances of two other great solo cantatas, while the two orchestral sinfonias which complete the album will prove refreshingly familiar.

Of Bachs 200 or so extant sacred cantatas, just nine are scored for solo voice, of which three are for alto, and the two best known  Vergnügte Ruh, beliebte Seelenlust, BWV 170, and Widerstehe doch der Sünde, BWV 54  are performed on this beautiful new album from countertenor Iestyn Davies. He couples with them with the alto version of the justly famous Ich habe genug, BWV 82, more usually associated with the bass voice, and it proves a winning combination. The question of exactly what sort of voice Bach had in mind when writing for the alto voice  boy alto or falsettist (countertenor)?  is complex and still much debated: the real test is whether the performer is both technically and musically convincing, and Davies scores on both counts. His is a silken voice that combines an underlying purity and focus with just a hint of the honeyed tones that, sometimes applied too generously by other singers, can sound cloying: not so here!

The tone of the texts in these three cantatas can be unsettling for modern audiences: renunciation of worldly ostentation, trembling and revulsion in the face of sin, and eagerly embracing death. Some performances go for the jugular, revelling in the vivid textual imagery, but Davies obviously bears in mind that the original purpose of these works was principally meditative, an opportunity for the congregation to reflect on the biblical texts or sermon of a particular day. While he is clearly alive to the meaning of the words (the clarity of diction throughout is remarkable), these are deeply considered readings, remarkable above all for their inwardness. Both text and music are allowed just enough space speak (as it were) for themselves, without recourse to needless dramatics.

The opening movement of Vergnügte Ruh is as harmonious as one could wish, the string players of Arcangelo under director Jonathan Cohen playing with gorgeous sensitivity, while the central aria, Wie jammern mich doch die verkehrten Herzen, makes a strong impression with its striking scoring of organ obbligato plus unison violins and violas. The closing aria, in which the voice expresses its disgust at all sinning, launches with a combination of gusto and poise, and includes lively organ figuration deftly played by Cohen.

Just as arresting is the three-movement BWV 54: scored for alto solo, five-part strings and continuo, it features a particularly bold opening aria with crunchy dissonances as the singer exhorts the listener to Stand firm against all sinning. After a central recitative that takes the vocal range down particularly low, the closing aria is a three-part fugue with chromatic lines and winding semiquavers evoking the twisted workings of the devil.

The closing work is Ich habe genug, which touches on the biblical episode of the presentation of Christ in the temple to the aged Simeon, and is a meditation on the end of life and worldly cares. It works surprisingly well with a countertenor of Daviess calibre, the vocal tone lending particular intensity to the text. Oboist Katharina Spreckelsen excels in the outer movements, while the central aria, Schlummert ein, scored for strings and continuo, is utterly sublime. The use of a lute in the continuo group pays rich dividends, subtly enlivening the textures.

Its good to have a couple of bonuses in the form of the Sinfonias from Cantatas 52 and 174, actually the recycled first movements of Brandenburg Concertos 1 and 3, the latter spectacularly expanded to include horns, oboes and bassoon. Lively and robust, they provide and effective foil to the cantatas between which they are placed. But the singing is the main reason to get this disc: sensitive, intelligent, and above all completely enthralling.

The Satanic glee of BWV 170 is delivered without histrionics, the tone rich and even. Directed by Jonathan Cohen, Arcangelos strings have a beautifully firm sound, with plenty of bow and intelligent details from the lute, while oboist Katharina Spreckelsen plays elegantly in this and in the more introspective anguish of Ich habe genug (BWV 82).  Anna Picard
BBC Music Magazine January 2017

Jonathan Cohens invigorating direction of the top notch Arcangelo and [Iestyn] Daviess extraordinarily questing approach make for a happy balance between abstract delight and rhetorical flair. For example, in the centrepiece of [Cantata] No 170, Wie jammern  a world turned upside down by Satan  disorientation is conveyed more by a plague-like itchiness than by the tendency to over-emphasise the imagery. ... If [Ich habe genug is] ostensibly a celebrated bass cantata (which the composer reworked for soprano and flute), the transition to alto works astonishingly well, but only because the soloist is so exceptionally accomplished. Schlummert ein with single strings is deeply moving, framed by the supple and poetic oboe-playing of Katharina Spreckelsen.  Jonathan Freeman-Attwood
Gramophone January 2017

Daviess singular gifts of open-hearted expression, reined in to perfection and with no excess or indulgence, are expertly balanced by Arcangelos prominent solo musicians. Early in the year, a favourite disc already.  Fiona Maddocks
The Observer 8 January 2017