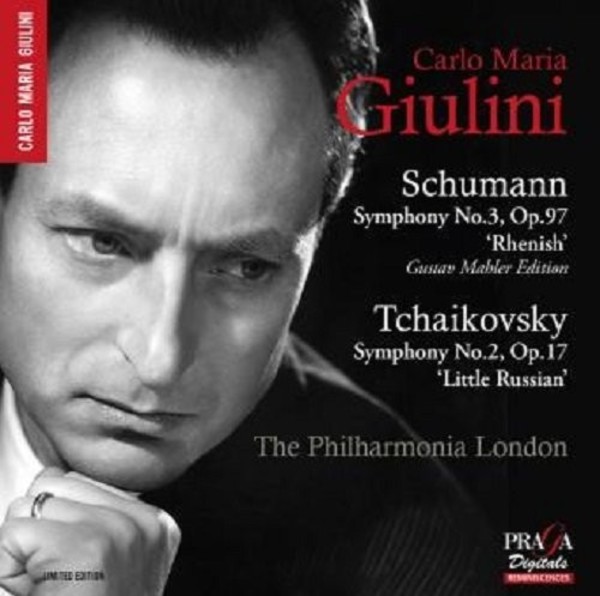 A tribute to Carlo Maria Giulini (1914-2005), equally famous as opera conductor (Falstaff, Don Carlos, Don Giovanni, etc.) and orchestra conductor. Walter Legge invited him to conduct his Philharmonia Orchestra in London, whose brass section was created by Dennis Brain (1921-57). Giulini proceeded to demystify Mahlers respectful re-orchestration of Schumanns Rhenish Symphony, proving one could pass from the waldhorn to the modern French horn. 30 years after Schumann, the young Tchaikovsky wanted the naturalness of the former plus the virtuosity of the latter  the magic of the sound of the horn.
Giulini expanded his repertoire at a careful pace, not conducting the symphonies of Mozart and Beethoven until the 1960s. During this time he was in great demand as a guest conductor of leading orchestras around the world, and made numerous well-received recordings with the Philharmonia Orchestra of London and several others. Overall, his impact on the musical world of the mid-to-late 20th century is summed up by Anthony Tommasini in his New York Times obituary of 2005:
"Far from being an autocratic conductor or a kinetic dynamo of the podium, Mr. Giulini was a probing musician who achieved results by projecting serene authority and providing a model of selfless devotion to the score. His symphonic performances were at once magisterial and urgent, full of surprise yet utterly natural. He brought breadth and telling detail to the operas of Mozart and Verdi."