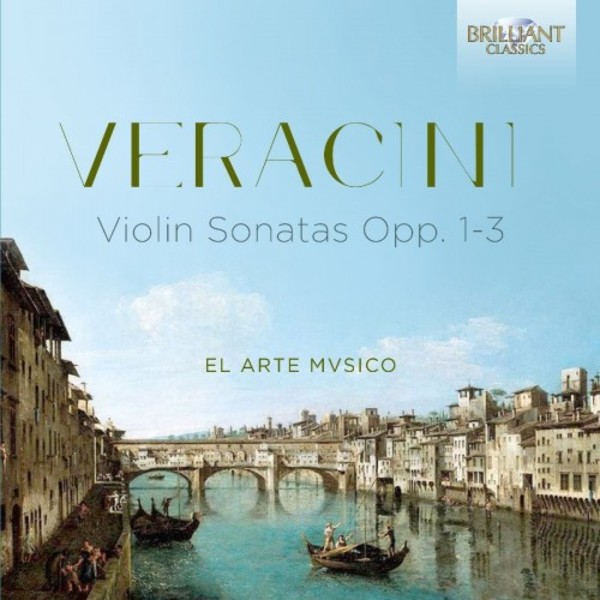 The Veracini who wrote these playful and virtuosic trio sonatas is not Francesco Maria but his uncle, Antonio. The nephews work is relatively well‐known, including an Op.1 set of twelve sonatas which has already received a recording on Brilliant Classics (BC93809) by Enrico Casazza and La Magnifica Comunita. Antonio was also born and raised a Florentine, taught by his father and in time director of the school of music which Veracini père had founded. This duty was the likely obstacle to his forging an international career, despite promising and well‐received visits to Rome and Vienna.

The three sets of trio sonatas published as Antonio Veracinis Opp. 1‐3 have been excerpted by El Arte Mvsico on this album. Op.1 (1692) is a collection of sonate da chiesa in the style of Corelli, whereas the works of Op.2, dating from two years later, are composed in the newly fashionable style of sonata da camera, in which the first movement is a free prelude that calls for interpretation to recreate the vibrant flourishes of Corelli's style. There is much technically challenging moto perpetuo writing in this collection, such as the Veloce of Sonata no.8, and notably French-inflected movements, such as the delicate Largo affettuoso of Sonata no.1.

Op.2 would go on to serve as a reference for composers including Francesco Maria Veracini, Giuseppe Tartini and Pietro Locatelli. Dating from 1696, the Op.3 collection returns to the sonata da chiesa form, but experiments with more unusual keys and more florid expression. The fast movements are complex and masterful, and the slow movements offer us some of the most beautiful, exquisite and refined melodies of the era, such as the third movements of Sonatas no.7 and no.8.