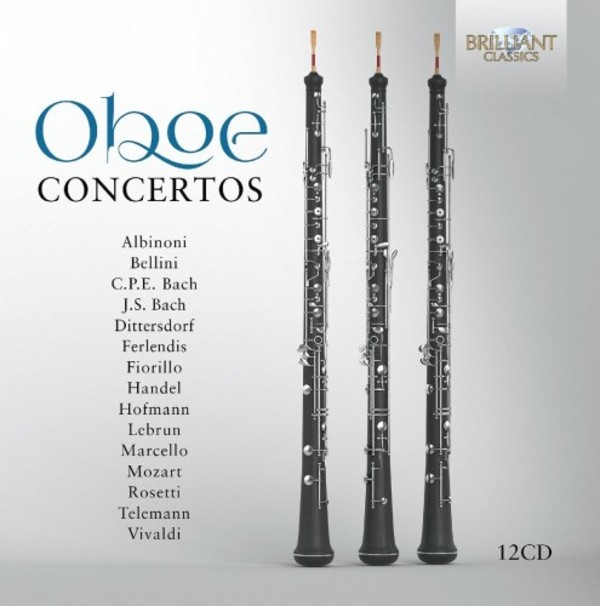 Like the violin, the oboe is one of the few instruments to have retained its popularity as a concerto instrument from the days of early Baroque for centuries to come. Thanks to its piercing timbre, able to soar above ensembles large and small, the instrument inspired works of excellent quality from a vast array of composers. This box brings together some of the finest music for oboe and orchestra from the Baroque period to the late Classical.

We begin with the master of the Baroque oboe concerto, Antonio Vivaldi, who wrote over 20 concertos for the oboe. Although the instrument was still in flux at this point  and Vivaldi had to moderate some of his writing to accommodate the oboes lack of agility in playing wide leaps at speed  he still manages to produce some creative and highly pleasing works. Albinoni was less inclined to rewrite violin music for the oboe (something Vivaldi did regularly), making his compositions more idiomatic. He experimented with writing for a variety of instrumental combinations, weaving his concertos for one or two oboes into the same opus of violin concertos, again underlining the two instruments connection.

J.S. Bachs Double Concerto for violin and oboe is a shining gem; despite the original manuscript being long lost, and the only available score a reconstruction based on the transcription for two harpsichords, Bachs characteristic solo instrument writing shines through, particularly in the sweet cantabile of the slow movement. His sons writing for oboe was more extensive and represents a marked change in style from the Baroque era, as the oboe became a popular instrument for chamber music of this period in an ensemble as well as alone.

It is interesting, therefore, to have C.P.E. Bachs Pastorale and Oboe Sonata included here alongside his concertos, demonstrating the value of the oboe during this period across many genres.

Mozarts Oboe Concerto K314 holds its rightful place as an outstanding example of the concerto genre in the Classical period. He wrote it for Giuseppe Ferlendis, whose own Oboe Concerto also features on this release. Once thought to have been written by Mozart himself, Ferlendiss concerto shares many elegant characteristics with the great composers style.

The oboe concertos of several lesser known composers serve as an interesting counterpoint to the more established works of this genre. Vincenzo Bellini wrote one of the few concertos for the instrument of the 19th century. Although better known for his outstanding operas  such as Norma  Bellini was also an adept orchestral writer. His bel canto style shines through on this beautiful Oboe Concerto. The Bohemian composer Rosetti wrote nine concertos for oboe, of which the Concerto in D  featured on this release  is one of the best examples, showcasing the composers imaginative orchestration and skilful contrapuntal writing.

This box includes performances from soloists and performers from around Europe. Vivaldis Baroque repertoire is expertly handled by experienced performers LArte dellArco, featuring Pier Luigi Fabretti as the soloist. Albinonis works are performed by the Stuttgart Chamber Orchestra, with Stefan Schilli and Giovanni Deangeli in the solo roles; the Lithuanian ensemble St Christopher Chamber Orchestra explores Telemanns concertos, meanwhile. A classic performance by Anthony Camden alongside the City of London Sinfonia is a highlight of this set, as the CD features Camdens own arrangements of Handels music, expertly edited and performed.

For oboe concertos both familiar and unknown, this is a comprehensive set, with performances of the highest quality. Whether dipping into Albinonis lively works or indulging in the sweet bel canto of Bellinis masterful Concerto, there is a wealth of music here to be enjoyed and treasured.