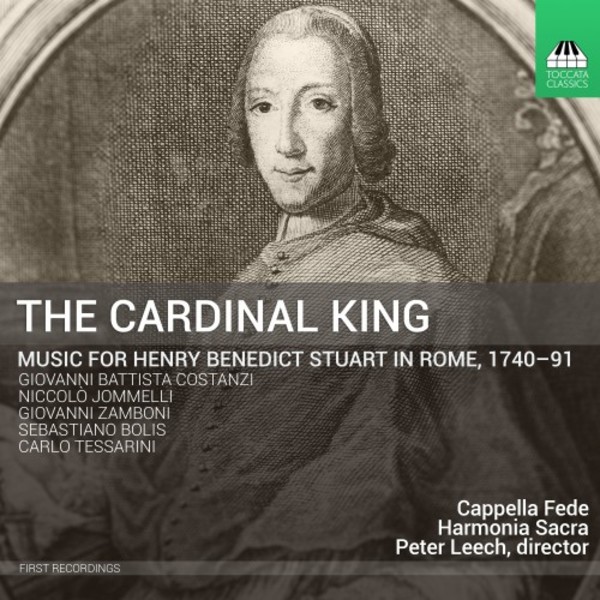 The Cardinal King: Music for Henri Benedict Stuart in Rome, 174091

Everyone has heard of Bonnie Prince Charlie, but almost no one knows that his younger brother, Henry Benedict Stuart (17251807), grandson of King James II of England and VII of Scotland and the last in the direct line of Jacobite succession, was a major figure in the hierarchy of the Vatican, and an important patron of the arts. This album presents the hitherto forgotten repertoire composed by the many musicians associated with, and employed by, Henry Benedict.

Sitting on the cusp of the Baroque and the Classical, these pieces likewise tread a delicate path between innocence and grandeur, between charm and formality, and suggest that the Cardinal, for all his power, may have been a rather gentle man. Little of the music of these five composers has been recorded  this is yet another area where the partnership between musicologist-musicians and Toccata Classics is throwing light on unknown corners of the repertoire.

Peter Leech is an award-winning choral conductor, musicologist, singer, composer, broadcaster and lecturer. A graduate of the Elder Conservatorium, Adelaide, and Victorian College of the Arts, Melbourne, he moved to the United Kingdom in 1996 and completed a PhD in musicology (supervised by Dr Peter Holman) at Anglia Ruskin University, Cambridge, in 2004. Peter is currently musical director of Cappella Fede, Harmonia Sacra and Collegium Singers, and is also an Associate Lecturer at Cardiff University School of Music, where he conducts the Chamber Choir.

Cappella Fede comprises some of the finest specialist early-music performers in Britain. Formed by Peter Leech in 2008 in response to an invitation to perform at St Francis Xaviers Church, Liverpool, for the Held in Trust exhibition, the group specialises in late seventeenth- and eighteenth-century music. This is the choirs first recording.