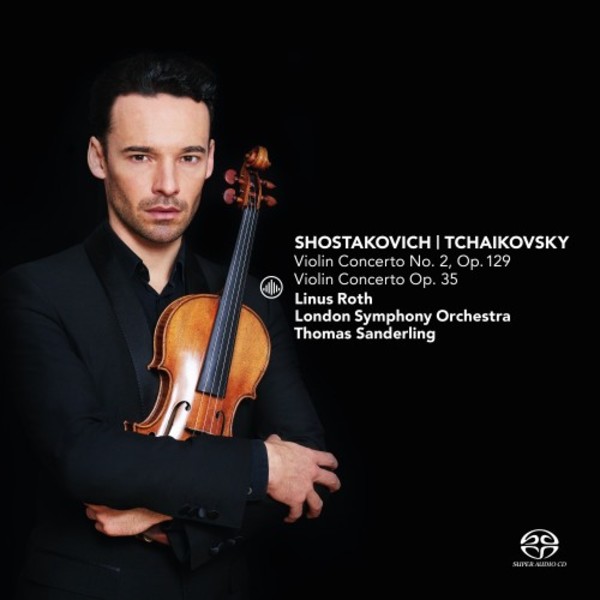 Linus Roth pairs Tchaikovskys Violin Concerto - the world premiere recording of its original version - with the Violin Concerto No.2 by Shostakovich, accompanied by the London Symphony Orchestra conducted by Thomas Sanderling.

This is the first recording of the Tchaikovsky Concerto that takes the new Urtext, published by Henle Edition, as a source. There are a few different notes, phrasings and bowings from what is usually played but the most obvious audible difference is that the whole second movement is played with the mute on. While it has become a tradition that violinists remove the mute for the second theme, this was never intended by Tchaikovsky - the mute imparts to this slow movement the feeling and sound of intimacy.

Shortly before composing this work Tchaikovsky married, followed closely by a nervous breakdown and severe depression. His composing was always strongly connected to his personal life, and this work is his coming back to life, a concerto full of optimism and positivity. Linus Roth has played the piece for 20 years and now feels the time is right to record his unique interpretation.

Shostakovichs Second Violin Concerto is a late work written when the composer was already ill and aware that his life would be soon over. The conductor of this recording, Thomas Sanderling, was a friend who knew Shostakovich well in his late years and provides unique musical insights into a work full of pain and struggle beneath its glittering surface.

The relationship between Roth and Sanderling is very special because they co-founded the international Weinberg Society together. Linus Roth has been an advocate of Weinbergs music for years. He was the first violinist to record the Complete Works for Violin and Piano (3-CD box, CC72567), receiving great critical acclaim. His next recording, combining the Violin Concertos of Weinberg and Britten (CC72627), was a Gramophone Editors Choice. Most recently Roth released Weinbergs Solo Sonatas for Violin 1-3, also on Challenge (CC72688).

Kirill Gersteins supreme musicianship helped reveal Tchaikovskys original intentions in his Piano Concerto No 1 this year, both on disc and at the Proms. Now the violin concerto comes under the microscope, with Linus Roth turning to an urtext edition to get closer to the composers initial score, though the changes are harder to spot here: some minor cuts restored, some markings removed. The most significant is the use of the mute throughout the slow movement, though even that is not unique to this recording. Whatever, the playing is superb. Thomas Sanderling conducts the brooding Shostakovich second concerto with the authority of one who knew the composer personally.  Stephen Pritchard
The Observer 6 November 2016