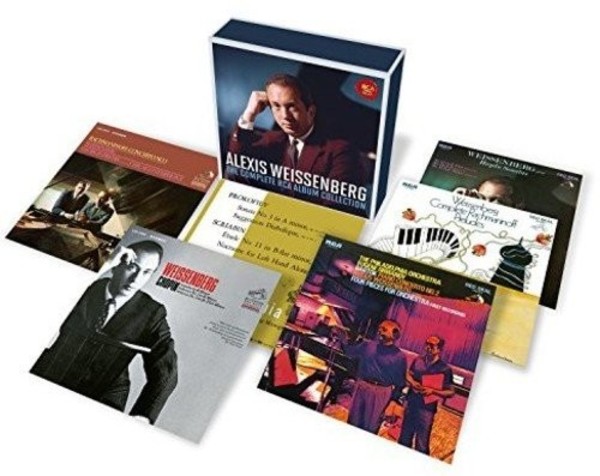 Alexis Weissenberg: The Complete RCA Album Collection brings together all of the pianists 1967/70 RCA Victor sessions for the first time in one place and 5 out of 7 CDs remastered from the original analogue sources, along with his 1949 recorded début that first appeared as a ten-inch Columbia Masterworks LP. The recordings include Chopins Scherzi Nos. 1 and 2 and Sonata No.3 in B minor, three Haydn Sonatas, a Debussy recital, Bartóks Piano Concerto No.2, plus interpretations of Rachmaninovs complete Préludes and Piano Concerto No.3 that became modern-day reference versions. The booklet contains full discographical information and an essay by Jed Distler.
Born in Sofia, Bulgaria in 1929, Alexis Weissenbergs musical journey effectively began during the war. In 1944, after three months confined to a prison camp, the teenage pianist and his mother escaped via Turkey to Israel. At 17 he travelled alone to America, where he had lessons with Artur Schnabel and Wanda Landowska. He studied at the Juilliard School with Olga Samaroff, who had taught Rosalyn Tureck and William Kapell. After placing first in the prestigious Leventritt Competition and a highly acclaimed 1948 New York début, Weissenberg became an overnight American sensation. In the aftermath of his early successes, however, Weissenberg retreated from concertizing to rethink his career and focus his priorities.
In January 1965 Swedish director Ake Falck shot an innovative film that featured Weissenberg in a stunning performance of Stravinskys Three Movements from Petrushka. Conductor Herbert von Karajan screened the film, and was so impressed with Weissenberg that he invited the pianist to participate in a filmed version of the Tchaikovsky First Piano Concerto. Later in 1967 Weissenberg returned to New York to play with the Philharmonic as a last-minute replacement for Arturo Benedetti Michelangeli. These events helped re-establish Weissenberg as a major, international artist. Tours, recordings and master classes followed steadily over the next four decades. After battling Parkinsons Disease for years, Weissenberg passed away in January 2012.