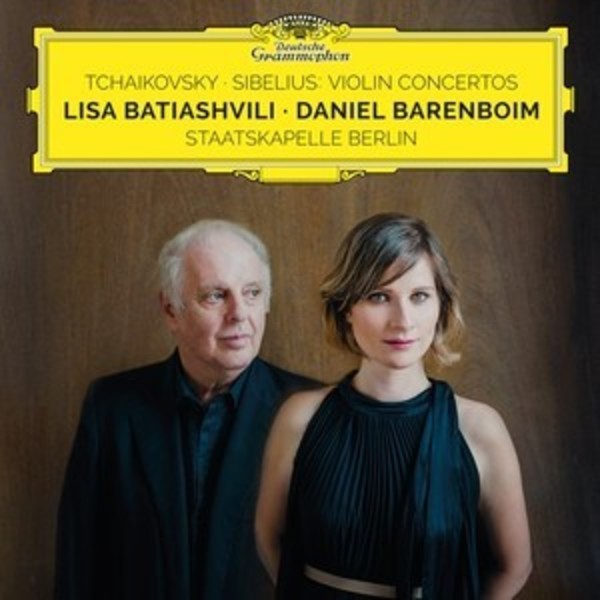 Lisa Batiashvili and Staatskapelle Berlin under Daniel Barenboims baton present an unforgettable version of Tchaikovskys and Sibeliuss violin concertos, two of the most beloved, passionate and demanding pieces for violin and orchestra
This album celebrates a happy and consolidated collaboration of one of the finest violinists of our times with one of the best orchestras of the world and the legendary pianist and conductor Daniel Barenboim
Ten years ago Daniel Barenboim initiated Berlins open-air State Opera for All concert on the historic Bebelplatz. With more than 40,000 spectators each year, it attracts a larger audience than any other classical concert in Germany. In each of the last four years the guest soloist has been Lisa Batiashvili, who on each occasion has performed one of the worlds great violin concertos: Beethoven, Brahms, Tchaikovsky in 2015 and in 2016 Sibelius
I absolutely love Sibelius violin concerto. I have the feeling its really a part of my life and of my musical story, because so many things happened around this concerto in my life.  The first most important was the final of the Sibelius Competition in 1995 where I performed this concerto for the first time with the orchestra.  Lisa Batiashvili
As the youngest-ever participant of the Sibelius Competition, Lisa immediately managed to win the second prize  a jump-start to a lightning career
As Lisa recalls, her musical partnership with Daniel Barenboim started over the phone: Barenboim heard me for the first time during a television broadcast of the Sibelius Concerto with the Finnish Radio Symphony Orchestra. Shortly afterwards he rang me up to congratulate me and ask me if we could perform the piece together.
I feel that this time with Barenboim and Staatskapelle Berlin, we brought a lot of new insights to it in some ways, even though the ground feeling for me for the piece will always stay the same.
This version of the Sibelius Concerto brings back a fresh approach to the famous score, by being as true and faithful to the score as possible, and by avoiding all the known and repeated traditional playing conventions and habits.
This album is the first ever recording of Tchaikovskys famous and romantic Violin Concerto for both Lisa Batiashvili and Daniel Barenboim.
It was a big surprise to me to hear that he had never recorded Tchaikovsky and it makes it even more special for me. I have the feeling that we really worked on it very closely, because that was my strongest experience with that piece  just to work it with him
The Guardian stated about Lisas performance with Daniel Barenboim and Staatskapelle Berlin at the Royal Festival Hall in 2015: Lisa Batiashvili was the ferocious soloist in Tchaikovskys Violin Concerto, intense in the first movement, luminous and heartfelt in the second, scintillating in the quickfire finale. It was a faultless performance, enthralling and electrifying.

Its a performance [Tchaikovsky] that eschews emotional hyperbole, focusing instead on poetic intimacy, most obviously manifested in the deeply thoughtful way Batiashvili shapes the warm-hearted melody in her opening entry and in the stunningly beautiful return of the same idea from the Berlin Staatskapelles principal flautist following the violin cadenza. ... This remarkable partnership of musical minds also excels in the Sibelius, the glacial opening passage in the first movement being especially hypnotic.  Erik Levi (Concerto Choice)
BBC Music Magazine April 2017

What strikes me (and indeed surprised me) more than anything about this popular coupling is the distinctive character that [Lisa Batiashvili] and her seasoned collaborator Daniel Barenboim find for both pieces. For sure, the pieces themselves belong in different sound worlds  and that could hardly be more apparent from the nature of the sound that soloist and orchestra have fashioned here  but it is the very particular musical personalities that make Tchaikovsky and Sibelius who they are that Batiashvili explores so tellingly.  Edward Seckerson (Recording of the Month)
Gramophone January 2017

[Batiashvili]s a dreamy-sounding, inward soloist at the start [of the Tchaikovsky], shaping the melodies with care yet propelling them forward  this mammoth work has rarely seemed so concise. The Sibelius soars and sings in the first movement, and dances in the finale with a rare agility. As for Barenboim, he gives the orchestral parts the depth and scope of symphonies: the climax of the first movement of the Sibelius will knock you flat.  Erica Jeal
The Guardian 24 November 2016