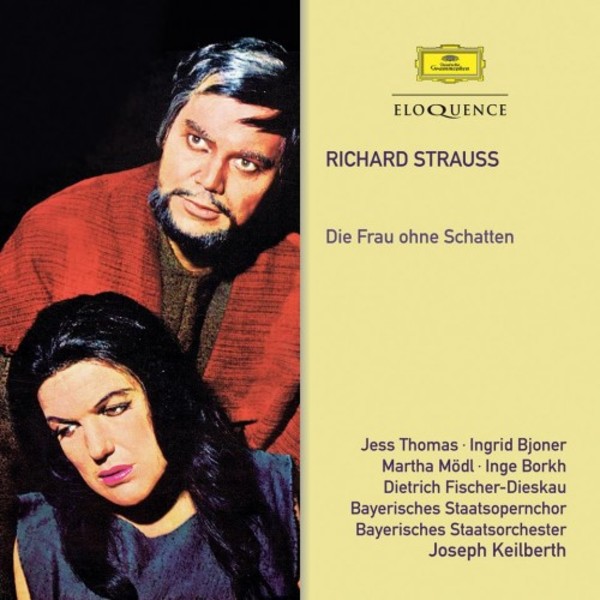 Die Frau ohne Schatten (The Woman without a Shadow), which Richard Strauss composed with his long-time collaborator, the poet Hugo von Hofmannsthal, received an unenthusiastic premiere in Vienna on 10 October 1919; Hofmannsthal's complicated and heavily symbolic libretto was cited as one of the problems.

However, it is now a standard part of the operatic repertoire, and Keilberths recording was made on November/December 1963 at the re-opening of the National Theatre in Munich, boasting a stellar cast which included Hertha Töpper, Jess Thomas, Martha Mödl and Hans Hotter, as well as Dietrich Fischer-Dieskau and Inge Borkh as the Dyer and his wife.

Keilberth has many good moments, particularly in the lyrical and the quieter parts of the work. [] fine, well-toned singing [from Jess Thomas]  Ingrid Bjoner gives a lovely performance of her difficult part, bringing out the essential lovableness, pathos and humility of the character and rising to all Strausss demands [] Inge Borkh is in magnificent voice  extraordinary brilliance of tone, and her overall conception, in all its changing moods, could not be bettered - Gramophone, August 1964

Cast:
- The Emperor: Jess Thomas
- The Empress: Ingrid Bjoner
- The Nurse: Martha Mödl
- The Spirit-Messenger: Hans Hotter
- A Guardian of the Threshold of the Temple: Ingeborg Hallstein
- Apparition of a Young Man: Georg Paskuda
- The Voice of the Falcon: Gerda Sommerschuh
- A Voice from Above: Hertha Töpper
- Barak, the Dyer: Dietrich Fischer-Dieskau
- His Wife: Inge Borkh