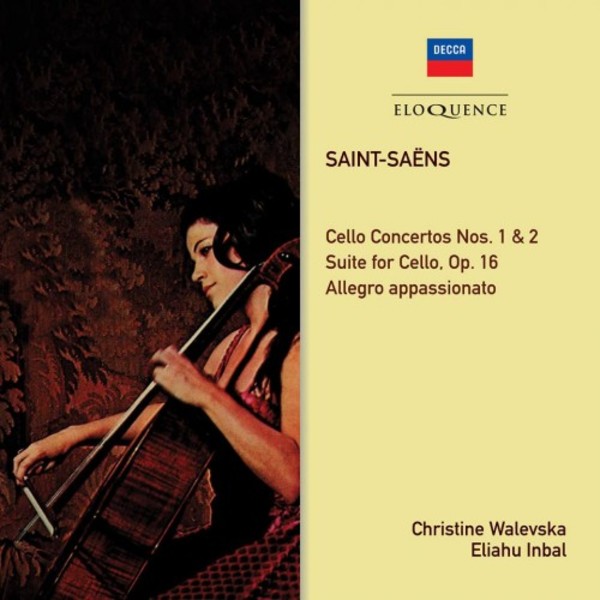 In 1872, when he composed his Cello Concerto No.1, Camille Saint-Saëns was 37. Although he had already enjoyed a few successes, at that time he was far from being the established and well-respected figure in French music that he later would become.

Nearly three decades went by before Saint-Saëns composed his Cello Concerto No.2. Although it has never enjoyed the popularity of the earlier work, none other than Fauré selected it as a Conservatoire test piece. Modern critics have argued that it is even finer, and that its themes are more noble. The Op.16 Suite was originally written for cello and piano and was later revised for cello and orchestra, while the Allegro appassionato in B minor is one of the most popular encore pieces for cello

When these recordings by Christine Walevska and Eliahu Inbal were first issued on Philips in 1974 they represented the first complete set of recordings of Saint-Saënss complete music for cello and orchestra to be released.

The playing of Walevska is good throughout, full of passion & flair where called for and rapt tenderness in other places - H.R. Audio.net

Every cellist plays at least the two concertos, but there are surprisingly few truly excellent recordings. Christine Walevska not only plays wonderfully, but she gives us all of the composers major works for cello and orchestra, and the performances have that French crispness and polish that so many more famous soloists lack. Shes also very well recorded, and the Monte Carlo Orchestra has this musical idiom in its collective bones. It really is rewarding to hear these performances again. - ClassicsToday.com