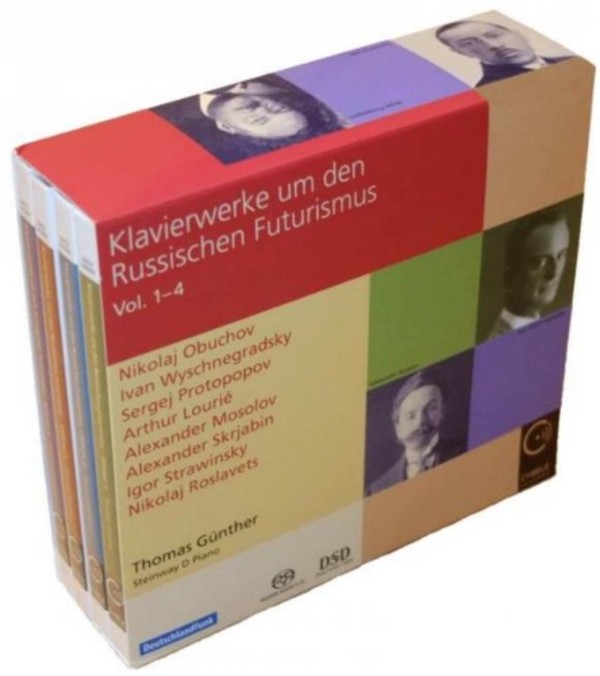 Pianist Thomas Günther (Folkwang-Hochschule Essen) summarizes his extensive, four-part excursion through the repertoire of Russian composers from the intellectual environment of Futurism to the present 4-SACD slipcase together. Since his first encounter with these works, at the Berlin Festival in 1983, he has repeatedly returned to them and thereby develops new interpretative facet and a deep understanding of their compositional structures. Based on these experiences now deployed in the first place the particular narrative quality of these works, which prove astonishingly as immediately appealing musical formulations in to those futuristic experiments express yourself in a new and contemporary language.

From Italian Futurism since 1909 the artistic impetus from which the Russian art scene sat fertile but not uncritical apart. However, the decisive musical influences yielded mainly the compositional late works by Alexander Scriabin, who had already developed around 1909 a non-tonal manner of composition. The anthology "Piano Works of Russian Futurism" now documented for the first time to this extent the remarkable musical experiments of a young generation of composers, in the artistic and social optimism of the 1910s and 20s has its roots.

What the six composers Edition are initially combined their tragic fates that stretched from the artistic isolation in exile, the suppression of their works to the complete discrediting and repression of its people. These circumstances have let down their biographies and compositional legacies for decades in almost complete oblivion. It is largely a merit of the composer and exiled musicologist Juan Allende-Blin, that since the late 1970s compositions by Nikolai Obukov, Sergei Protopopov, Ivan Wyschnegradsky, Arthur Lourié, Alexander Mosolov and Nikolai Roslavets again came to the performance.

For the Berlin Festival in 1983, Allende-Blin pianist Thomas Günther as an interpreter of this hitherto almost unheard piano music involved. The matter was not settled, and the discussion of these composers and their exceptional works employed Günther in sequence repeatedly. He expanded his repertoire regularly and deepened his understanding of the compositional procedures. Thus, a differentiated approach which makes him each piece abgewinnen new interpretative facets developed. Finally, in 2007 had the opportunity this experience in a comprehensive four parts recording series documenting.

The recordings were made in co-production with German radio vertically every two years between 2008 and 2014. The items include respectively a meaningful and dramatically closed the programme, among the selected works are also several world premiere recordings. The SACD series would draw attention to the fate of this generation of composers and especially the extraordinary quality of the repertoire. Here encyclopaedic completeness was aimed, but given meaningful work couplings and compositional quality of preference.