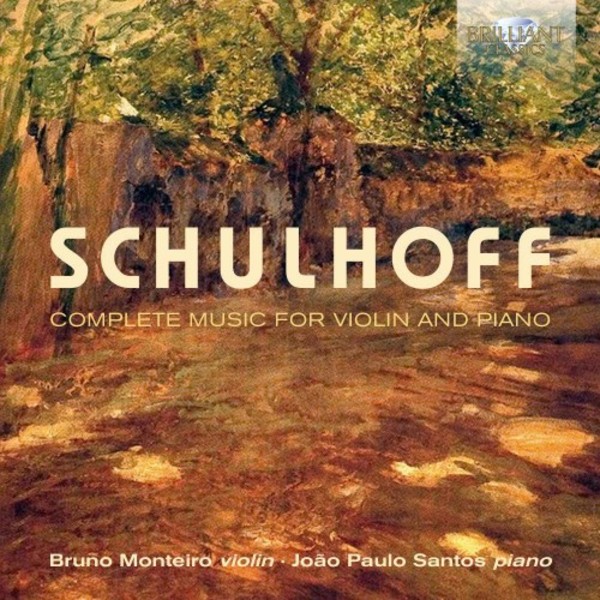 The last two decades have seen a richly merited revival of interest in the music of Erwin Schulhoff, one of the German‐Jewish composers who fell victim to the Nazis rise to power in the 1930s and whose work was soon declared Entartete Musik; he was deported to a concentration camp in Bavaria in the winter of 1941 and died there of tuberculosis nine months later, not yet 50 years old.

By then Schulhoff had earned a considerable reputation in his native Prague and beyond, with a catalogue of large, ambitiously programmatic symphonies, daring jazz‐age chamber music and an opulent, Expressionist opera, Flammen, first staged in Brno in 1932. The Suite and First Sonata for violin and piano are much earlier works, less harmonically adventurous and more indebted to the examples of Debussy, Richard Strauss and his teacher Max Reger, effusive and lyrical in expression.

Dating from 1927, the solo Sonata is spiced with brilliant, folk‐like writing and spikier harmonies, masterfully written within the Bachian tradition and a striking predecessor to Bartóks work in the genre. Encoded within the more consoling theme of the slow movement are all twelve notes of the chromatic scale: Schulhoffs answer to Schoenbergs innovation. The Second Sonata was written the same year; its percussive writing and unsettled mood, especially in the third‐movement Burlesque, demonstrate why Schulhoff was held in high esteem from Prague to Paris. The work is cunningly structured in a cyclical form which transforms the opening motif throughout its four movements.

This is the second recording for Brilliant Classics made by Bruno Monteiro and João Paulo Santos: the first being of music no less individually situated on the cusp of modernism, by Karol Szymanowski (BC94979). Their partnership received enthusiastic acclaim from the review section of classical.net: Every release from Bruno Monteiro and João Paulo Santos confirms them as a tremendously adventurous and musical partnership a masterful survey of Szymanowski a project of real importance and wide musical appeal.

Reviews of this disc:

This program is both generously packed and very convincing. Bruno Monteiro and pianist Joäo Paulo Santos have already tackled some adventurous repertoire for Naxos and Brilliant Classics, and this may be their finest achievement on disc. The sound is excellent and ideally compliments the performances. - Classical.net

Here, once more, is very clear the artistry of both musicians: virtuoso playing, technical command, the profound knowledge of the works. There are no reservations. These artists are the first choise right away amoung the existing versions. They offer outstanding readings where we can hear the richness and power of seduction. - Jornal de Letras

The Brilliant production team has done well to provide us with this sincerely refreshing account of this particular facet of Schulhoffs repertoire. - The Rehearsal Studio

Violinist Bruno Monteiro has a way of dramatically changing the tonal color of his instrument, sometimes note by note, based on the music's character at any given moment. A technique that his quite captivating and effective. Bruno Monteiro and pianist Joao Paulo Santos can't help but feed off each other's energy, be it bright or dark. Monteiro's eloquent playing cuts through its tough exterior and reveals the earnest intensity burning at its core. - Classsical Music Sentinel

Violinist Monteiro possesses a fine tone and technique Monteiro does not hold back; he attacks this music with relish, fully understanding its idiom and purpose. All in all, a fascinating glimpse of a different side of Schulhoff. - The Art Music Lounge

Monteiro's tone is always clean, golden, and vibrant, qualities he maintains throughout the program. Monteiro and Santos make a splendid team, keeping the drama of the piece moving forward with a pulsating, scintillating enchantment. - Classical Candor (Favourite Recordings 2016)

The works are played with lively spirit and idiomatic sensitivity by Bruno Monteiro on violin and João Paulo Santos on piano. This volume spells out his brilliance. I do recommend it very strongly. - Classical Modern Music

Wide use of mute, sonorities close to irony or harmonically unstable intervals, propitiated by the search for a consolidated modernity, flow with naturalness in the bow of Bruno Monteiro, great connoisseur of these sonatas. - Revista Ritmo ***** (Editor's Choice/Top 10 CDs of March)

He (Monteiro) makes a good fist of it () João Paulo Santos does sound at home, he proves an adept interpreter, bringing out every nuance of the music. The sound is good. The accompanying booklet notes are quite detailed and informative, concentrating on the music rather than the composer. They make a good introduction to these works.
MusicWeb International

This is a most important record of previously-neglected 20th-century chamber music... We have to thank violinist Bruno Monteiro and his excellent partner Joao Paulo Santos for giving us this very well played and recorded CD, which makes a belated act of restitution for a notable composer.
Musical Opinion

A fascinating and rewarding issue. There is no doubting the firm belief in this music that exudes from Monteiro and Santos performances. ... In the end, I think its fair to say that Schulhoff is an acquired taste, one which, if you ever acquire it at all, is apt to develop slowly. Monteiro and Santos, however, succeed in making the composers music as palatable as have any other players Ive heard. Their Schulhoff release may thus be recommended as a good place to whet your palate.
Fanfare