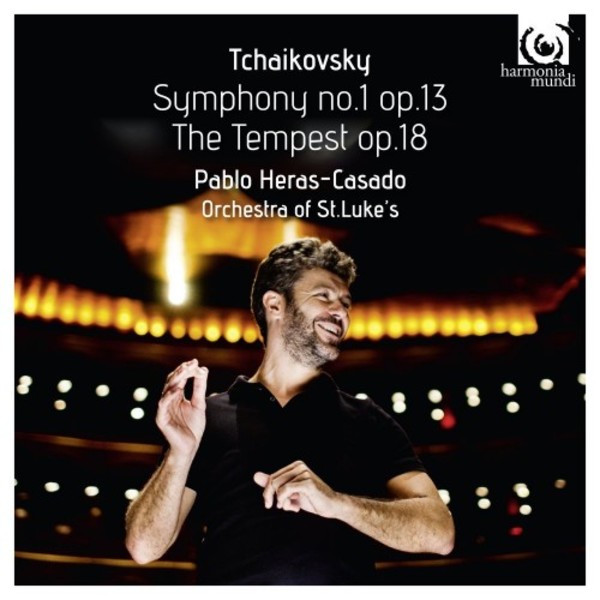 Tchaikovsky - Symphony no.1, The Tempest

Pablo Heras-Casado enjoys an unusually varied conducting career  encompassing the great symphonic and operatic repertoire, historically informed performance and cutting-edge contemporary scores. He has served as principal conductor of Orchestra of St Lukes since 2011, now extended to September 2017. OSL began as a chamber ensemble based at the Church of St Luke in the Fields in Greenwich Village. Today, St Lukes Chamber Ensemble consists of 21 virtuoso artists who perform a diverse repertoire and make up OSLs artistic core.

Harmonia Mundi are proud to release OSL's debut album for the label featuring two of Tchaikovskys earliest notable works, both of which are dramatic and vibrant: Symphony no.1 (Winter Dreams) and The Tempest, a sprawling and turbulent seascape.

With his experience in conducting period instrument ensembles as well as command of a much wider repertoire, Pablo Heras-Casado was an ideal fit as principal conductor of the Orchestra of St Lukes (OSL), an ensemble whose music directors have included Roger Norrington and Charles Mackerras. Despite being in post since 2011, this appears to be Heras-Casados first recording with the orchestra, and its a notably successful one, showcasing two of Tchaikovskys less widely performed orchestral works. All of the OSLs trademark qualities are here: transparent textures, rhythmic alertness, immaculate ensemble and supreme stylishness. In repertoire of larger scale than usual for them, they lack nothing in power, but there's an incisiveness to their playing that scores over more conventional big-band recordings of these works.

First up is Tchaikovskys First Symphony: dating from 1866, soon after his graduation from the St Petersburg Conservatoire, this piece cost the composer (according to his brother) more in hard work than any of his mature works. But although the familiar struggles with form are already evident, there is no doubting the melodic facility and ability to conjure up effective atmosphere even at this early stage. The first two movements in particular evoke the Winter Daydreams of the subtitle, the first movement (with its infectiously babbling woodwind) representing Dreams of a Winter Journey, the cantabile slow movement a proto-Sibelian Land of Desolation, Land of Mists. The OSL musicians invest this movement with real soul, full of lyricism and feeling, but never tipping over into vulgarity. The delicately dance-like third movement, with its memorable central waltz, has gracefulness in abundance, ever light-footed, while in the finale, with its Russian folk song, one seldom notices the jaggedness of the formal edges, so committed is the playing. Heras-Casado allows the music to unfold naturally, never pushing too hard, and the result is a most unassumingly charming performance.

The coupling is the only slightly later symphonic fantasia on Shakespeares The Tempest. Its evocative seascape, memorable side-by-side depiction of Ariel and Caliban, and thrilling storm, are all so vivid in this performance that youd hardly guess the composer was more or less writing to order according to a detailed programme imposed on him by the musicologist and critic Vladimir Stasov. In this performance, Heras-Casado imbues the music of the lovers Miranda and Ferdinand with exquisite tenderness, helped by playing of enormous lyricism from the OSLs strings. The woodwind are as characterful as they are throughout the preceding symphony, while the brass and percussion, given their head in the storm episode, make a thunderous impact.

With winter now almost upon us in the northern hemisphere, what better time to explore these less familiar pieces? Full of feeling, extremely persuasive, and treated to a recording of sumptuous depth and clarity of focus, these performances are sure to delight Tchaikovsky lovers old and new, whether as a treat for yourself or as a seasonal gift. More from this team, and soon, please!

There is throughout the symphony a continence of rhetoric that may appeal to anyone not unshakably attached to Golovanov, Svetlanov and their kin. Even the finales efficient rather than inspired episodes of contrapuntal imitation are elevated to bring the symphony to a well earned point of arrival worthy of comparison with Jurowski and Karajan. The voltage may be lower in The Tempest, but then Heras-Casados approach is not to mask the structural cracks in the piece with greasepaint. He attends carefully to each picturesque episode and naturalistic detail, bringing Liszts Les préludes to mind more than Tchaikovskys Romeo and Juliet.  Peter Quantrill (Recording of the Month)
Gramophone February 2017