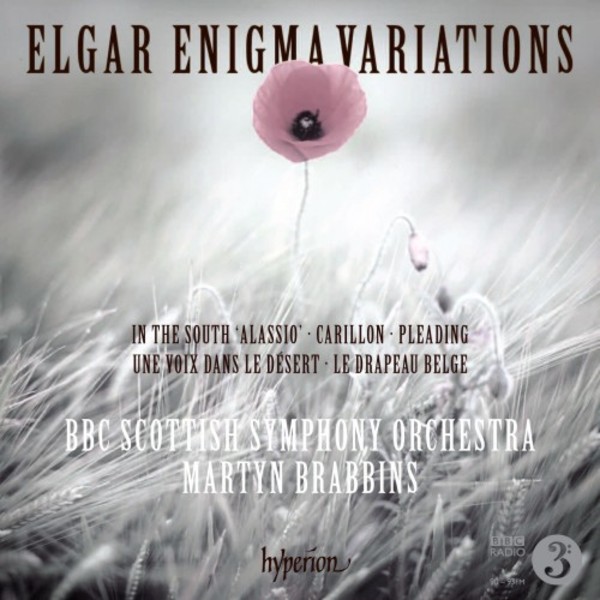 Two much-loved orchestral favourites representing the summit of Elgars maturity are coupled with three of the lesser-known wartime works, here receiving their first recordings with the original French texts. Kate Royal is the soprano soloist in Une voix dans le désert, a hauntingly tender masterpiece which every Elgarian should know.

Heres an Elgar disc with a difference. Timed to coincide with the season of remembrance, its centrepiece is probably the composers most famous work, the Enigma Variations, and it receives a magnificent performance here from Martyn Brabbins and the BBC Scottish Symphony Orchestra. But it is the couplings that set this release apart, including a trio of morale-boosting works from the Great War that will be of interest even to the most jaded of collectors.

Proceedings open with an exceptionally invigorating account of the 1904 concert overture In the South. Bursting to life in the manner of the best Richard Strauss, it soon takes on the noble glow of classic Elgar, and it is the variety of light and shade that makes this performance so convincing. The heavy brass add weight and impact at the climaxes, but the delicate shading achieved by strings and woodwind is no less impressive, reminding one of what an extraordinary piece  equal in length to many a symphonic poem, but with none of the pretensions associated with that genre  this can be in the right hands.

Much the same can be said of the Enigma Variations, which under Brabbinss ever-dependable direction, has a sense of rightness and delight in the different characters that too often eludes more famous names. Consider the famous Nimrod variation, where the opening hush is utterly magical, yet at a broad tempo is never over-milked as it too easily can be. And it is offset perfectly by the perfectly judged framing variations, the graceful W.N. and the delightfully airy Dorabella Intermezzo. From the opening perfectly-paced statement of the Enigma theme itself to the glorious closing pages of the finale, marvellously bolstered by the optional organ, this is an account to savour again and again, fully worthy of standing alongside such classics as Monteux, Barbirolli, Boult and Jochum, but with all the benefits and clarity of modern digital sound. (The amount of naturally audible detail throughout is enviable indeed.)

The Great War works are heard here with the original French narration, delivered with sensitive assurance by Florence Daguerre de Hureaux. The imposing waltz-like opening of the once hugely popular Carillon vividly evokes a bygone era, while Kate Royals soprano graces the strongest and most affecting of the trilogy, Une voix dans le désert. Even the last and weakest of the three, Le drapeau belge, has an authentically period sensibility to it, and taken together, this recording of the trio is now the one to seek out.

The final cherry on the cake is Elgars own orchestration of his 1908 song Pleading, heard here for the first time, as originally intended, with the vocal line played instrumentally, by the BBC Scottish Orchestras own principal clarinet, Yann Ghiro  and its as memorable and touching as anything on the disc, a delightfully wistful way to close.

With first-class recording from the seasoned team of Andrew Keener and Simon Eadon in the City Halls, Candleriggs, Glasgow, this is an Elgar disc that will be of interest to both specialists and the wider audience. With a generous 82 minutes playing time, this timely reminder of Martyn Brabbinss expert judgement in the twentieth-century British repertoire can be snapped up with confidence and without delay!

Martyn Brabbins follows fine, firmly unsentimental, bracingly muscular performances of two of Elgars best known orchestral works  the Enigma Variations and the concert overture In the South  with four smaller scale, little known pieces. One is an arrangement for clarinet and orchestra, never recorded before, of the song Pleading, which turns it into a melancholy orchestral miniature, while the others form a trilogy of recitations, delivered forcefully on the disc by Florence Daguerre de Hureaux.  Andrew Clements
The Guardian 3 November 2016

Once in a while, a performance comes along that focuses understanding of a familiar work in a new way  or recaptures an insight that might have been lost. Thats how it was for me with Martyn Brabbins and the BBC Scottish Symphony Orchestras Enigma Variations. It isnt just the sumptuous but finely layered orchestral textures, or the commanding architectural coherence, that make this exceptional ... Whats truly revelatory however is the way each variation seems to speak. Enigma is the stand-out experience here, but In the South is compelling and captivating too  Brabbins shows that  as Elgar himself did in his own recordings  ardour and subtlety can be two sides of the same complicated coin.  Stephen Johnson
BBC Music Magazine December 2016